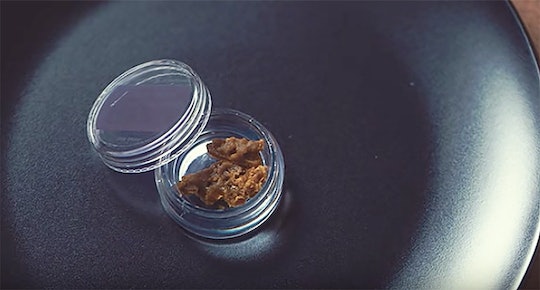 I don't know about you, but I've smoked some marijuana in my lifetime (you can't tell on me because I live in Canada and it's legal here now, but if you could not tell my kids that would be great) And as someone who has raised four teenage sons, I can say with absolute certainty that they've definitely smoked weed in their lifetime. But here's the real question that concerns me now — what kind of weed were they smoking? Because a recent study found that more teens are smoking highly potent marijuana concentrates, and I have to say I'm a bit concerned about the whole thing.

A new study conducted by Arizona State University (ASU) evaluated a data from the 2018 Arizona Youth Survey, which surveyed nearly 50,000 eight, 10th and 12th graders. The findings reveal 33 percent of teens surveyed have tried marijuana at some point, which doesn't feel terribly surprising. But what is surprising? The fact that 44 percent of the surveyed teens have tried marijuana concentrates at some point. Apparently, concentrates have become so popular with teens that it's known by several different names, including wax, honey oil, budder, shatter, dabs, and black glass, according to WebMD.

So what is the big cause for concern with marijuana concentrates? The main issue appears to be that it contains approximately three times the level of THC (the ingredient in marijuana that gets the user high) than weed that comes from a marijuana plant, Live Science. It should be noted that marijuana concentrate does not look like a traditional plant, instead appearing brittle. It looks like wax or oil and can shatter easily, according to Just Think Twice.

There tends to be a perception that marijuana is relatively harmless in the grand scheme of things, but DrugAbuse.gov cautions that marijuana can be a "gateway drug" to using more harmful and addictive narcotics. What's more? Marijuana concentrates could actually be more addictive to teens because of those higher levels of THC, as lead researcher and ASU assistant professor of psychology Madeline Meier explained to Web MD, stating:

It is concerning because we think higher doses of THC might increase a person's risk for addiction. If these kids are already at high risk for addiction, that combined with their use of very high THC cannabis could increase that risk.

It isn't just the prospect of becoming addicted to marijuana concentrate that's concerning — as it turns out, there could be permanent effects as well. Frequent marijuana use during the teen years could cause a decline in IQ, something that could change your kid's life for years to come, according to research shared by the Child Mind Institute. Which brings forth the next problem — knowing whether or not your kid is using marijuana or a marijuana concentrate. Apparently, many parents are unaware of this potent form, as Meier noted in her study:

If you're concerned about your teen's well-being following this study, there are some red flags you can look for going forward. Good Therapy suggests monitoring your kids for these potential symptoms:

Unfortunately, some of these signs are typical for teenagers, which makes things a bit difficult. So perhaps the best thing to do is keep those lines of communication open with your kid and have honest conversations with them about the potential dangers of marijuana concentrates.