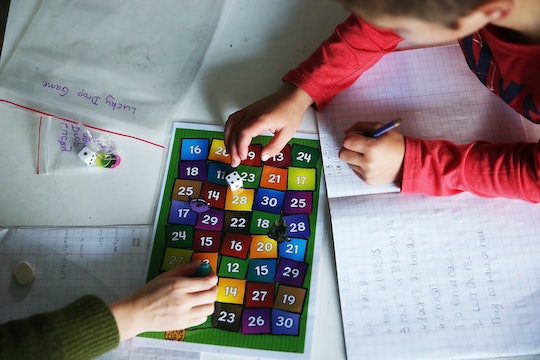 What Are Schools Doing To Prevent Norovirus?

If you’re noticing an uptick in the number of miserable kids in your immediate circle, there’s a good reason. It’s norovirus season, people. According to the Centers for Disease Control, norovirus causes upwards of 21 million cases of stomach or intestinal inflammation in the United States and sends around 400,000 people to the emergency room each year. And since the virus thrives in places where people are close to each other for long periods, touching the same surfaces and/or sharing food, norovirus can spread through a classroom like nobody’s business. So, what are schools doing to prevent norovirus as we enter peak season? Sadly, there’s not much teachers and school health workers can do.

Why is that? For starters, the virus spreads really quickly. The CDC estimates that people can begin showing symptoms of norovirus infection — ranging from diarrhea and vomiting to fever and body aches — in as little as 12 hours after exposure. So a kid who seems fine when they leave for school at 7 a.m. can be in full-blown flu mode by dinnertime. What’s more, the center reported that norovirus can be found in feces even before an infected person begins feeling ill; so without a rock-solid hand-washing routine, one child with norovirus can infect dozens of other kids before they even realize they’re sick.

And when norovirus does strike, as any teacher, parent, or health worker would attest, it’s notoriously tough to kill. According a Wall Street Journal report on recent outbreaks, those ill with norovirus continue shedding for days or even weeks after becoming infected. Studies have found the virus lingering on surfaces as many as four weeks after it was put there. The virus can survive in water left at room temperature and still cause infection.

Speaking to the Journal, Dr. Christine Moe, a professor at the Rollins School of Public Health at Emory University, called the hundreds of known strains of norovirus “the most infectious group of pathogens that have ever been described.”

A Today Show segment that aired on Jan. 25 reported that norovirus had already emptied thousands of schools across the country due to widespread exposure. One Chicago high school had canceled classes after more than 1,000 students and 50 teachers had caught the bug, according to Today; several schools in Rhode Island had closed to allow classrooms and cafeterias to be disinfected.

Nothing can send a fully functioning household into total anarchy quite like a stomach flu, amirite? But since kids are more likely to be exposed to the virus in school and day care settings, teachers and care providers are really on the front lines when it comes to fighting norovirus outbreak. So, while schools can’t do much by way of prevention, they can encourage kids to protect themselves from norovirus with proper hand hygiene: washing hands with hot, soapy water for 30 seconds at a minimum. And, of course, teachers can let parents know as soon as there seem to be several kids showing the same signs of norovirus infection.

But the good news is the misery of having norovirus is pretty short lived. Most people get better within three days, according to the CDC, and with proper hydration most people can get by without having to visit the doctor or an emergency room. And the better news is the peak season tends to peter out around March. So keep washing those hands, folks; hopefully, the worst is nearly over.