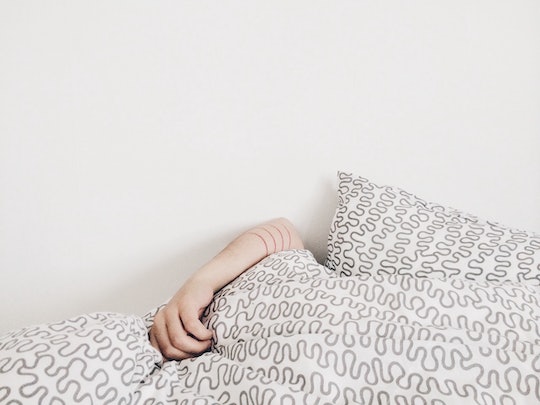 I remember napping after lunch in kindergarten. My teacher would get out the floor mats after lunch, and we would pick out our blankets and a book for quiet time. It was the best thing ever, even back when I was a little girl. Because I was already smart enough to understand that naps are amazing. Which is why I am so totally jealous of these sleep pods being used by some high schools as a way for teenagers to reboot in the middle of their day. And I'm hoping they become a thing in offices too.

As we all know and remember, teenagers need a lot of sleep — nine to 10 hours a night, believe it or not. And a recent report by the National Institute of Health found that only about one-third of teenagers are getting the right amount of sleep every night. That lack of sleep not only affects their mood (and let's face it, nobody wants a teenager in a worse mood than normal), but also their performance in school and their anxiety levels. In an effort to get teens the sleep they need, high schools in New Mexico purchased sleep pods from the company Metronaps, with the help of mental health grants, in 2008 to give students the down time they needed.

So how does it work? According to Sandy Peugh, health services director for the Las Cruces School District (one of two utilizing the sleep pods; the other is Gasden School District), educators learned to identify certain behaviors that signified a student needed a little nap time and essentially sent them to sleep in the pod for 20 minutes. She told The Santa Fe New Mexican:

We found, as we were using them at the high school, that it was great for kids who weren’t getting enough sleep at night — which teenagers don’t, for a variety of reasons. They were coming to school exhausted, and we’d put them in the pod. Within 20 minutes, they were coming out refreshed and focused, and they were able to stay at school, so instruction time wasn’t missed.

Rather than just a regular old cot, these sleep pods include a reclining chair and a domed sensory-reduction bubble, and were initially used in a sleep lounge in the Empire State Building. The pods feature state-of-the-art options like soothing music, headphones, and soft lighting.

These amazing sleep pods aren't just used for overtired teens either. Linda Summers, an associate professor at New Mexico State University and the person responsible for securing the grants to purchase the sleep pods, told The Santa Fe New Mexican that the pods were beneficial for a variety of uses. Whether it was high performing students overloading on anxiety from test results, teachers with high blood pressure issues, or students with headaches, 20 minutes in the pod seemed to be the magic cure-all.

While some parents might not love the idea of their teenager napping at school, it seems to be having positive results for the New Mexico high schools. Summers reported that 99 out of 100 kids who used the sleeping pod midday were able to return to class and learn productively afterwards.

As high school junior Stefanie Gutierrez said after using the sleep pods to help her cope with anxiety, "I felt like someone was comforting me, actually. I was safe. It felt like I was safe."

Whether the trend catches on or not is yet to be seen.