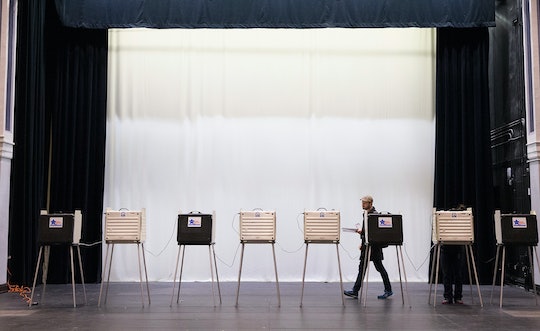 What Are Superdelegates, Anyway? They Hold Extra Power In The Democratic Nomination Process

Voting for the next president of the United States seems like a simple affair — or at least, it feels like it should be. But once you actually delve into the process, whether you're voting for the first time or you're a confused Canadian (who, me?), things get a little more complicated. What are caucuses? What's a brokered convention? What are superdelegates, anyway, and should Bernie Sanders be worried about Hillary Clinton's stockpile of them?

If you've been following election news, you've probably heard (repeatedly) that former Secretary of State Hillary Clinton has 467 pledged superdelegates, while Vermont Sen. Bernie Sanders has a measly 26, according to the Associated Press. The Republicans, in contrast, have none at all. So, in the Democratic party, what makes certain delegates superdelegates, and what makes them so "super"?

Regular delegates are pledged by the public vote in each state (i.e., if one state has 10 delegates and 60 percent of voters cast their ballots for Sanders, 6 delegates are pledged to Sanders and 4 are pledged to Clinton). However, superdelegates get to vote for whichever Democratic candidate they want. More importantly, they also get to vote whenever they want, and they get to switch their support anytime they feel inclined, right up until the Democratic National Convention in Philadelphia. (Insert triple-finger-snap here.)

Clinton currently has the vast majority of superdelegates, but Sanders thinks he can sway them. "If we continue to do well around the country and if superdelegates — whose main interest in life is to make sure that we do not have a Republican in the White House — if they understand that I am the candidate ... who is best suited to defeat the Republican nominee, I think they will start coming over to us," Sanders told CBS in February.

Historically, that's what superdelegates have done — they tend to follow the vote of the people. In 2008, when then-Senator Barack Obama began winning primaries and caucuses, he also began collecting previously undecided superdelegates, as well as a few who came over from Clinton's side, according to Bloomberg. Superdelegates are, after all, politicians — and to defy what voters want wouldn't make them look very good or help them score many votes for themselves in the future. Superdelegates have also never overturned the popular vote before, according to Vox. They've only tipped the scales to whoever was already ahead in the delegate game.

However, Clinton's high superdelegate count does pretty definitively show that she's a party favorite. If Sanders and Clinton end up close in the regular delegate count, the superdelegates could use their power to tip the balance in Clinton's favor, regardless of the popular vote. It's doubtful — and a little undemocratic, really, if you're down with this whole "power to the people" thing — but a reality of the current Democrat system.