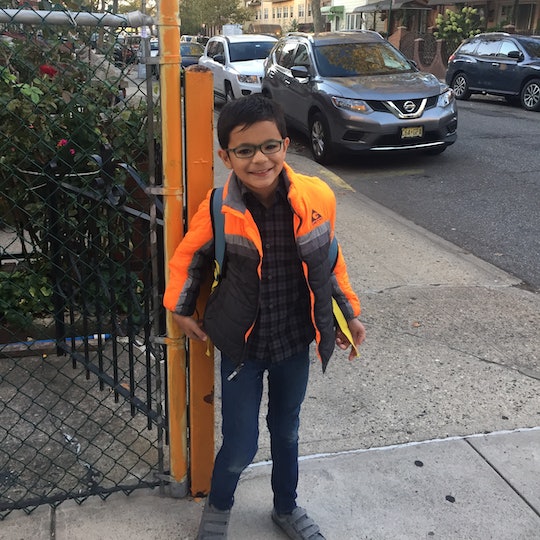 Everything You Need To Know About The Different Types Of Autism

I remember being terrified when my son was first diagnosed with autism spectrum disorder. I had very little idea of what that meant beyond what I'd heard on Oprah — I didn't know what it meant for his life. It's a spectrum, so of course I began wondering, what are the different types of autism, and how do they differ? With 1 in 68 children in the U.S. diagnosed with autism, according to Autism Speaks, it's important to know the differences. Not only for parents of kids with autism, but for everyone.

My son's first occupational therapist, Miriam Schotsky of Brooklyn, New York, explained it to me better than anyone has since. "There are really three main types of autism that you see every day. The one everyone thinks they know is Asperger Syndrome. This is the one people think Rainman had. People with Asperger's can be super high functioning or more withdrawn, but the cues are the same. They have difficulties recognizing subtlety, they don't read emotions very well, and they tend to do poorly in social situations," she tells Romper.

My son has Asperger Syndrome, and this is very much the truth for him. He loves going to the park, but has difficulty interacting properly with other kids. He's not great at reading emotion, but holy cow is his sarcasm spot on and razor sharp. He's like a little Larry David and he makes my heart explode.

"The next type of autism is PDD-NOS or pervasive developmental delay, not otherwise specified," Schotsky says. "It's the hardest to understand of the three. It's a personality disorder and a developmental delay, but neither one tends to eclipse the other." According to Yale University, PDD-NOS "is a 'subthreshold' condition in which some — but not all — features of autism or another explicitly identified Pervasive Developmental Disorder are identified." Schotsky calls it "autism plus or minus" because of how broad the diagnosis is.

Children with PDD-NOS, according to Yale University, will show signs of a moderate to severe developmental delay, while also showing a mild to moderate social impairment. People with PDD-NOS tend to have more self-stimulatory behaviors — called stimming or stim — than people with Asperger Syndrome. They may flap their hands, rock back and forth, or mouth objects. My son has difficulty managing his stimming behavior. For him, he is a hardcore bouncer, and I don't mean he randomly kicks people out of places. No, he bounces on his toes while rocking slightly, to the tune of burning hundreds of calories a day doing it.

The last category of autism is what's called "classic autism," which Harvard University defined as lower-functioning socially, mentally, and academically than people with either Asperger's or PDD-NOS. It's early onset (as in, younger than 3 years old) and can be very debilitating. Children with autism range from partially verbal to completely non-verbal. According to the American Psychiatric Association, this is the most frequent diagnosis of kids placed on the spectrum, with a full third of all children diagnosed with autism remaining completely non-verbal and unable to attend even the most basic of their own needs. Children with autism may have severe emotional difficulties ranging from tendencies toward self-harm to being actively aggressive toward others.

While those are the three main types of autism under the 2013 DSM-V update, there are two additional syndromes which are often categorized with autism, but aren't technically related — Rett Syndrome and Childhood Disintegrative Disorder. Rett Syndrome, according to the Mayo Clinic, is a disorder that affects primarily girls, and is both neurological and developmental. It can severely impair muscle development and motor functioning, as well as affect the development of the brain. It's also a regressive disorder that gets worse as the child gets older.

Childhood Disintegrative Disorder, also known as Heller's Syndrome, is a late onset (older than 3 years old) disorder that, according to the Journal of Pediatric Neurosciences, affects social, language, and motor skills. It is exceedingly rare with only 1 in 100,000 children being affected by it, and those are overwhelmingly male. With Heller's Syndrome, children are perceived to be developing normally until there's a sudden, sharp decline in overall functioning of the child.

Researchers don't know what causes these disorders yet — they have some clues, but not a lot. For instance, many cases of Rett Syndrome have a genetic component that they can test for, but not everyone with that gene will develop Rett's. Science knows that an advanced paternal age increases the likelihood that a child will be born with autism, according to Autism Speaks, but if that was always the case, then vasectomies would be far more popular. However, the causes may be multitudinous. The one thing researchers do know is that vaccines do not cause autism. Andrew Wakefied made all of that up, CNN reported, and now society is facing a crisis in that it's losing herd immunity.

Autism is complicated, and not always a straight-forward diagnosis. For those of us living with or who have an autistic child, it can make life somewhat more challenging. The more people know and understand the autism spectrum, the easier it is to interact with people diagnosed with the disorder. It helps with research, advocacy, and awareness, and that is incredibly important for families like mine. Each level of diagnosis has a nuance to it, a slight variation, and that's why it's a spectrum diagnosis — it's a really wide range of symptoms and each is unique.