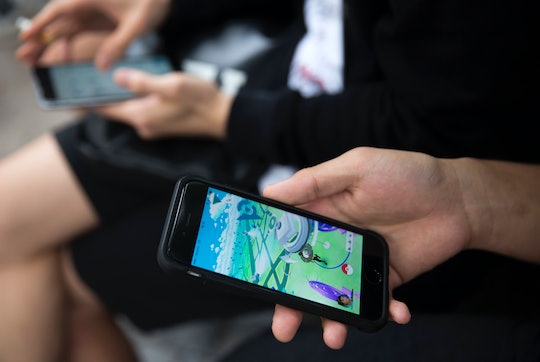 What Are The Green Leaves In 'Pokemon Go'? They're Unexplained In The Game

"Pokemon Go": it's the game that's taken over the nation. However, it's also one of many apps that come with few pre-written rules, leaving players to figure out its rules and clues intuitively... or turn to the internet for answers. One of the questions many first-time players encounter has little to do with the actual pocket monsters in the app and more to do with the game's little, unexplained details. For example, what are the green leaves in "Pokemon Go," and are they a good or bad sign for players who see them?

In case you missed them, the green leaves appear somewhat sporadically in the game. As your player (or "trainer," in Pokemon speak) walks through your digital world, you'll occasionally see rustling leaves nearby. Is it a sign of a light breeze blowing through, though, or is it an indicator of something bigger than a meteorological detail embedded in the game?

This is actually a good question, because if you've been ignoring those rustling green leaves in "Pokemon Go," you've likely been missing out on a few good Pokemon catches. According to Heavy, the leaves appear over areas where Pokemon tend to spawn. There's no guarantee that Pokemon will be there, mind you — but it's a reliable sign that Pokemon tend to visit that joint.

If you're a little bummed about the "no guarantee" thing, don't worry. There's still a way to use the rustling leaves to your advantage. For example, if you look at your list of nearby Pokemon and see that there's a Pokemon nearby, it can still be kind of hard to know exactly where the little creature might turn up. If, however, there are also rustling leaves that appear near you on the map, that's probably a good spot to go searching for your Pokemon.

The green leaves in "Pokemon Go" are just one of the app's many subtle tricks of the trade. If you find a Pokespot you like, you can always attach a "Lure Module" to it to attract extra Pokemon — or, if you don't feel like spending $0.99 on a module, you can piggyback off of other people's lured Pokespots to find more Pokemon. (How can you find lured Pokespots? Look out for pink flowers on your map — they're a fairly good guarantee that Pokemon will be hanging around.)

With a few extra tips up your sleeve, you're all set to go find some more Pokemon. Just make sure you look up from your smartphone now and again, so that the only thing you're walking into is a few promising Pokespots.