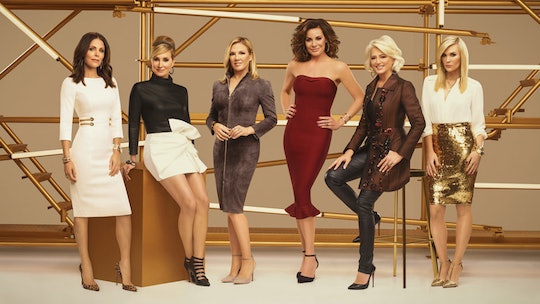 The 'RHONY' Season 11 Taglines Are A Mood

Life would be a lot easier if we learned to make fun of ourselves like The Real Housewives of New York City. Bravo released the RHONY Season 11 taglines ahead of the Mar. 6 premiere, and the ladies of the Big Apple have plenty to say. So what can fans expect from The Real Housewives this season? If you were to judge a season based on the opening credits, then you'll know that there's plenty more drama where that came from.

If you've been around the block when it comes to RHONY, then you'll know that the taglines typically reflect what's going on in each housewife's life. The Season 10 taglines referenced both the good and bad in everyone's life — from the countless tabloid headlines about Luann de Lesseps to Bethenny Frankel's relief work in Puerto Rico. There was plenty to unwrap from a single one-liner, and the eleventh season tagline does just the same, if not more.

Are you excited to see what's coming for Luann, Bethenny, Tinsley Mortimer, Ramona Singer, Sonja Morgan, and Dorinda Medley in the new season? Because you should be. The teaser for RHONY lays it all on the table and — it certainly does not disappoint.