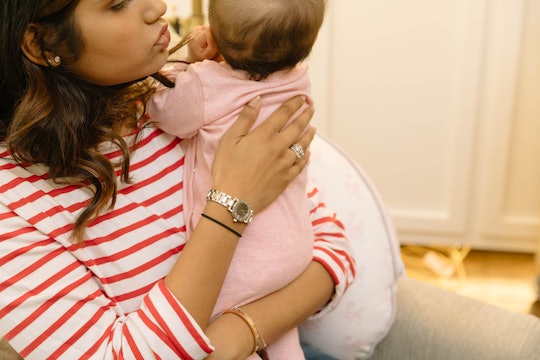 Here's What Happens To Your Baby After They Get A Flu Shot, According To An Expert

Flu season is almost upon us, and it's time to get your yearly shot, especially if you live or work around vulnerable populations like children, or the elderly. And what about your own baby? These days, doctors give the flu vaccine to patients as young as 6 months old, and for good reason — catching the flu at this age can be devastating. But what are the side effects of the flu shot in infants? As it turns out, they're nothing to worry about, and as with all standard shots, the benefits far outweigh the risks.

According to WebMD, while the biological makeup of the flu changes from year to year, vaccine side effects remain pretty much the same. In children under 2, symptoms can run the gamut from fussiness and muscle aches to low-grade fever.

A child can start a flu vaccine series at 6 months of age, as Dr. Jarret Patton MD, FAAP, tells Romper. He notes that practitioners usually offer the flu shot along with other routine vaccinations, especially if you bring your child in for her well-visit in the fall — the time of the infamous flu season. "We typically want to protect young infants and children, because they are the most vulnerable to severe bad outcomes from the flu, which can include death." Patton explains that side effects are similar to those experienced after other vaccines — soreness at the injection site, a very slight fever, or fussiness lasting less than 24 hours.

But despite mild side effects and huge protective benefits, not all parents are on board. As Patton notes, "The number is difficult to come up with, but maybe a third-to-a-half of my patients have declined the flu shots in the past."

But the flu is serious business for little ones. The Centers for Disease Control and Prevention (CDC) estimated that since 2010, as many as 26,000 children under 5 were hospitalized for flu-related complications, while a great deal more visited urgent cares and emergency rooms. According to the CDC, flu complications in children include pneumonia, dehydration, worsening of pre-existing conditions (like asthma), ear infections, and tragically, in extreme cases, death. So why do parents decline?

"Most of them, when I ask, don't give a specific reason for [declining the flu vaccine] or explain their fears," says Patton. When parents do explain, they usually tell him that they just don't want that shot, or that it's not necessary for school. "The age-old rumor that the flu shot gives people the flu tops out the most common reasons. In other words, there is nothing specific that people don't like. Their mind is already made up."

But the vaccine absolutely will not give you — or your child — the flu. Patton goes on:

"The flu vaccine . . . is made from killed and broken up components of the flu virus, elements that cannot cause an infection. But these components help stimulate the immune system to provide protection, so that when babies are exposed to the real virus, their immune system is already ramped up . . . and may eliminate the disease entirely."

Just to reiterate: you can't catch the flu from the vaccine. According to Harvard Health Publishing, that's just an unfortunate myth.

So don't let possible side effects keep you from vaccinating your infant — or yourself — against the flu this season. Such side effects are mild, generally harmless, and a spoon full of sugar compared with a possible infection. If your child does feel very unwell after a flu shot, give your pediatrician a call. Most likely, however, a kiss and a sticker will do just fine.