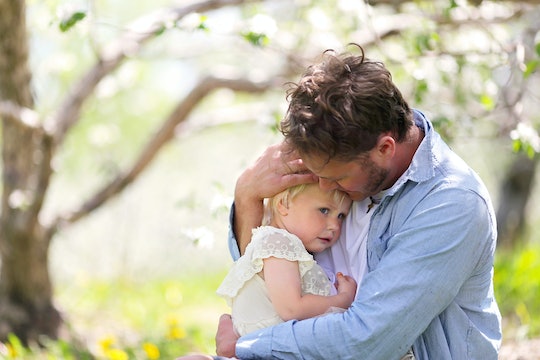 Everything You Need To Know About Concussions & Toddlers

Toddler is a very appropriate name for kids ages 1 to 3, thanks to all of that literal toddling they do. But with those moves comes a lot of tumbling, falling, and watching your kid bop their head when they fall. That horrible “thud” noise that comes along with it? It's a huge part of parenthood. But how do you know when something is more serious? What are the signs of a concussion in a toddler, and what should you do when that happens?

A concussion, according to pediatrician Jarret Patton, is an injury to the brain caused by trauma, which “can happen from a fall, being hit by a toy, or any blunt force to the head. The characteristic that causes a concussion is a force that quickly starts and quickly stops,” he tells Romper in an email interview. Your brain is surrounded by spinal fluid, which acts as a cushion in your skull. When your head moves quickly, your brain may bounce off your skull, which causes concussions, according to Patton.

The earliest sign of a concussion is if your toddler looks dazed and confused after taking a blow to the head, he explains. Your toddler may also complain of headaches, and changes in vision, as well as showing a loss of balance and forgetfulness. Pediatrician Eboni Hollier adds, “increased or decreased sleepiness ... vomiting more than a couple of times, and persistently increased fussiness” are also signs of a concussion in a toddler. “When the concussion is mild, usually the child will remain awake and alert and will typically cry for only a few minutes — usually because of pain and initial shock — before going about their usual activities and play,” she tells Romper. “Usually if there is a bump, but not a wound that will likely require stitches, you are OK to watch your child at home, even though they may have a headache, nausea, or vomiting (less than twice).”

With all the lumps and bumps your baby will get during their short career as a toddler, Hollier says that most head bumps are very minor and don’t typically cause significant damage and injury to the child. “It is important for caregivers to know when to seek help and when a big hug and kiss is all that is required. The good news is that even when children have suffered a serious head injury, many may make a full recovery."

Signs you should seek medical attention immediately include your child losing consciousness "and if they do not wake up in a few minutes after losing consciousness,” Hollier says. “Call 911 for help. Most children that lose consciousness for more than a few minutes will be hospitalized for overnight monitoring. If your child has a bruise, your doctor will recommend placing a cold compress on it to help reduce swelling and pain. The doctor will likely advise you to monitor your child for 24 to 48 hours to ensure that the injury is not more serious than it first seemed to be.”

According to Patton, you don’t have to be ‘knocked out’ or unconscious to have a concussion, but he adds that if your toddler is unconscious, "you don’t need to keep them awake until they see a physician, but you should get care immediately."

Hollier says the treatment for concussion is rest, and your doctor will likely tell you to ensure that your toddler gets lots of it. Additionally, “your child should avoid screen time, including television, cell phones, or tablets, because those may overstimulate the brain when rest is needed,” she adds. “Recovery time from a concussion depends on how severe the concussion was.”

It’s totally normal and expected that your toddler will bump their head from time to time while they’re wandering around. As always, go with your gut. If you’re worried, it wouldn’t hurt to call the pediatrician, but if they’re acting unstable, throwing up, or not waking up, definitely call 911 and get to a hospital immediately.