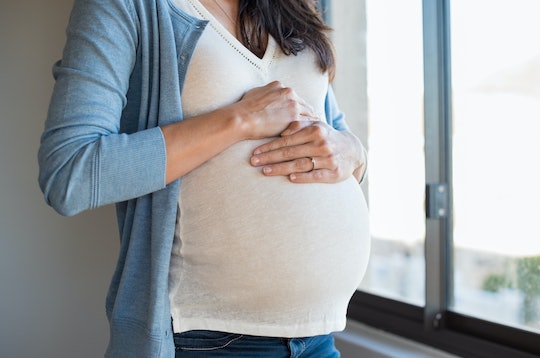 Pregnant moms have a lot to worry about. As if the anxiety surrounding the idea of labor and delivery aren’t enough, you have to worry about your health and the health of your baby, too. One all too common worry for many pregnant women is gestational diabetes, and in the age of internet self-diagnosis, you can drive yourself crazy second guessing your symptoms. If you have any risk factors, you may be even more concerned. So what are the signs of gestational diabetes?

Romper reached out to Dr. Kathryn Wright, OB-GYN of Facey Medical Group, who says that when it comes to a mild case of gestational diabetes, there are often no signs or symptoms. She says that the more overt symptoms — thirst, hunger, and frequent urination — are also normal pregnancy symptoms, so it’s important to be evaluated by your doctor. “Regardless of history or symptoms," suggests Wright, “all women should be tested for gestational diabetes.”

According to the American Pregnancy Association (APA), along with thirst, hunger, and frequent urination, other symptoms of gestational diabetes include nausea, fatigue, blurred vision, and frequent bladder, vaginal, and skin infections. Considering these signs can also be common symptoms of pregnancy, they should not be used as a measure to diagnose gestational diabetes.

The APA explained that between weeks 24 and 28 of your pregnancy, your doctor should test you for gestational diabetes with a glucose test. They noted that this time frame is ideal for testing because this is when your placenta creates significant amounts of hormones that can cause insulin resistance. If your test results indicate high glucose levels, you will likely be tested again to confirm.

Wright explains that in pregnancy, women’s blood sugar levels are elevated due to a hormone called Human Placental Lactogen. She says when this hormone, which is made by the placenta, causes insulin resistance — meaning that more insulin is required to get the same amount of glucose into the cells from the blood — it results in glucose and amino acid elevation in your blood, allowing greater availability to your rapidly growing embryo. “It is a normal physiologic change,” says Wright, “however, sometimes the body overdoes it, and gestational diabetes results.”

There are factors that can put you more at risk to having gestational diabetes. If you have a personal history of diabetes, as well as a family history of any kind of diabetes, you should be tested early in your pregnancy, suggests Wright, as well as at the end of your second trimester. She adds that if there is any indication or concern for diabetes, you should follow a low-glycemic index, low-carb diet. If a diet is being followed, and there you still have high blood sugar levels, Wright says that your doctor may suggest the addition of insulin or oral medications.

A simple glucose test — in which you drink a large, sweet, glucose solution and have blood drawn afterwards — should tell you and your doctor whether or not you have an issue with high blood sugar levels. So if you have been dealing with diabetes before your pregnancy, or if it runs in your family, it’s a good idea to get tested. Just relying on analyzing your symptoms may not be a great standard of diagnosis, considering how the symptoms of gestational diabetes are extremely similar to common pregnancy symptoms. Talk to your doctor about when and how to get a glucose test, and any relevant medical history. All the poking and prodding during pregnancy can get annoying, but getting a proper diagnosis from a doctor, along with the appropriate follow-up and treatment, will be worth it in the long run.

More Like This
All Your Questions About Getting Pregnant After A Tummy Tuck Answered
Breaking Down The Different Types Of Postpartum Infections
Can The Way You Sleep Really Turn A Breech Baby?
Are Movie Theaters Too Loud For Pregnant People? OB-GYNs Explain