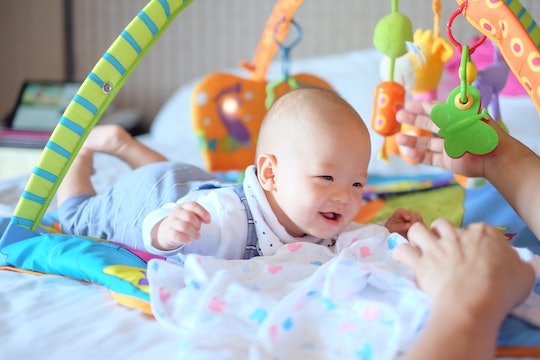 Here's What Vitamin D Deficiency Looks Like In Babies

Once you have your sweet new baby, you may be afraid to take them out of the house for a little while — especially if it’s your first. And even when you do take them out, you’re probably extra, super careful to protect them from getting any sun — which is smart and totally understandable. However, the sun is how many babies and children get the most of their vitamin D. But it’s hard to know how much sun is too much, that’s for sure. You may be wondering, what are the signs of vitamin D deficiency in babies, especially if you’re breastfeeding and/or not leaving the house a lot. Also, are you getting enough vitamin D to pass on to your baby?

According to Dr. Daniel Ganjian, a pediatrician at Providence Saint John’s Health Center in Santa Monica, California, sometimes signs of vitamin D deficiency can be vague, and some babies don’t show any symptoms. Vague symptoms include “irritability, pain, poor growth, motor delay, increased susceptibility to infections, [and] thickened ankles and wrists,” he says in an email interview with Romper. Dr. Gina Posner, a pediatrician at MemorialCare Orange Coast Medical Center in Fountain Valley, California adds, “[Babies] can have increased illness, delayed closure of the fontanelle, [and] bowing of the legs. If they have severe rickets (caused by vitamin D deficiency), they can have seizures or apneic spells (these are due to hypocalcemia that is caused by the vitamin D deficiency),” she tells Romper.

How does this happen to some babies and not others? Posner says, “If a mom is vitamin D deficient, an infant can be born with this deficiency. Also, if they are exclusively breastfed, breast milk does not have enough vitamin D, so they need supplementation with 400 IUs daily of vitamin D. If they have darker skin or live in a place that doesn’t have much sunlight (or they don’t get sunlight exposure), they also can be deficient.” Ganjian says it’s also usually from decreased intake. “Vitamin D is found mostly in fish and liver/organs meats, which most kids unfortunately do not eat much of,” he says.

As far as prevention goes, Posner notes, “With infants, you can supplement with 400 IUs of vitamin D daily (especially breastfed ones). If they are formula fed, they need to drink 33 ounces of formula daily to get enough, so you can also supplement.” If you’re a breastfeeding mama, Posner says you can also take 6400 IUs of vitamin D a day, which will pass on through the breast milk. “Also, exposing light-skinned kids to 10 to 15 minutes of midday sunshine can make the body produce adequate vitamin D (but you have to weigh the risks of the sun exposure),” Posner adds.

Thankfully, vitamin D deficiency isn’t necessarily hereditary, except if the mom is deficient, the baby can also be born with a deficiency, according to Posner. “Some rare diseases that can lead to vitamin D deficiency include celiac disease, malabsorption syndrome, inflammatory bowel disease, cystic fibrosis, and even rarer causes such as vitamin D-dependent rickets types 1A, 1B, and 2,” Ganjian says.

If you’re breastfeeding, it’s super important to go to your regularly scheduled checkups with your baby’s pediatrician to make sure there are no signs of vitamin D deficiency. But thankfully, it looks like it’s a pretty easy fix to help ensure your baby is getting all the vitamin D he or she needs. Supplements and 10 to 15 minutes of sunshine don’t seem too hard, right? Grab that stroller and head out for a quick walk in the sunshine. That will probably do both you and baby a lot of good.

More Like This
Are Babies Lonely In The NICU? Here’s What Experts Say
Can You Mix Breast Milk & Formula? Experts Weigh In
What Is RSV?
How To Get Boogers Out Of A Baby's Nose