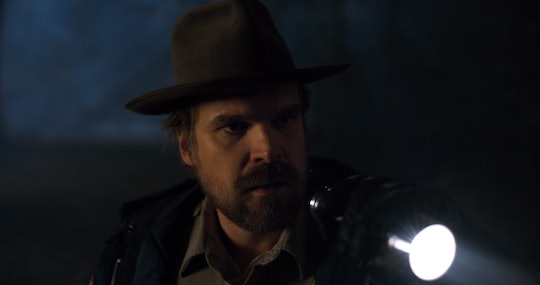 Hopper Had A Close Encounter On 'Stranger Things'

Warning: Episode 5 spoilers ahead! If the residents of Hawkins, Indiana didn’t have it bad enough already with a Shadow Monster looming ahead of them and a baby Demogorgon in Dustin’s cellar, what’s going on beneath the ground is another otherworldly problem to add to the docket. Just ask Hopper, who recently had a close encounter with some nasty (and seemingly alive) vines. So what are the vines on Stranger Things? They pose a serious threat to Hawkins, especially since they’re literally rotting the earth from underneath the ground up.

In the Season 2 premiere, the vines were already snaking their way through the town underground, rotting acres of pumpkin patches and even causing trees to begin to rot. When Hopper got stuck in the underground tunnels with the vines, it was finally clear that whatever the vines are on Stranger Things is dangerous for everyone in town. Like something out of a '90s Batman movie a la Poison Ivy, they wrapped around Hopper until he could no longer move and he would have been permanently done for if Joyce hadn’t arrived at the last minute, along with the suited up scientists from Hawkins Lab.

It may have been obvious that the vines underneath Hawkins are a danger, but it wasn't until one of the scientists started killing them with the flame blower that their connection to the town got much more real. Will started screaming and then convulsing on the ground as if they were also burning him. And with the way he’d already acted in the episode — feverish but claiming that the monster inside of him wanted things cold — there’s no other explanation other than the vines are directly linked to the Shadow Monster he keeps seeing in his "now-memories," which is also now connected to him.

It's almost as if these vines are an extension of the Shadow Monster, meant to literally destroy everything in its path from the ground up. Will said that the Shadow Monster intends to kill everyone and since it’s not yet here, it would make sense for the vines to be the beginning of the end for the residents of Hawkins.

It’s hard to say if the vines are also from another dimension like the other monsters we’ve seen on Stranger Things so far, but they’ve likely been rotting the ground since Will returned from the Upside Down, which is when his now-memories began showing him visions of the Shadow Monster and of what's likely to come.

It was Will’s sight, after all, that led them to Hopper underground and revealed that there are secret tunnels full of vines below the town, so it all must be connected. That’s definitely going to make it harder to actually kill the Shadow Monster and everything it’s apparently brought with it.

Fans all knew from the Stranger Things Season 2 trailers to expect a big alien-looking monster the likes of which probably eats Demogorgons for breakfast, but nothing really prepared viewers for the possibility of there being multiple monsters from the Upside Down dimension infiltrating Hawkins. (Seriously, why does anyone still live in this place?)

Is the Shadow Monster terrifying? Absolutely, but that doesn't mean we shouldn't pay close attention to these vines as well. They may look somewhat harmless, but Hopper underestimated them and it almost got him killed. And now poor Will is once again caught in the middle of it all. He can feel the Shadow Monster's pain, and by extension, any pain the vines feel as well. If these two creatures are one in the same and they have a hold on Will, that'll make them almost impossible to take down. How do you destroy them without destroying Will in the process? Hopefully, our favorite Hawkins gang can find a loop hole and save this boy from the darkness once and for all.