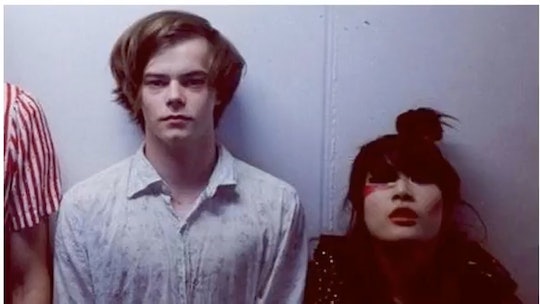 What Band Was 'Stranger Things' Star Charlie Heaton In With His Ex, Akiko Matsuura?

To the surprise of absolutely no one, Season 2 of Netflix's Stranger Things has been an absolute hit. And along with even more mysteries to uncover in Hawkins, Indiana, came some real-life intrigue when it was revealed that one of the show's stars reportedly has a son with a musician in real life. So, what band were Charlie Heaton and his reported ex, Akiko Matsuura, in?

The two played in a "noise rock band," called Comanechi together back in 2013, according to NME. And, as Heaton's son, Archie, was born in 2014, according to Us Weekly, it seems as though Heaton and Matsuura were probably together while in the band.

According to NME, Heaton began acting and left the band in 2015, and he soon found his big break on Stranger Things. But, being a relatively low-key celebrity, not a lot of information about Heaton's personal life was known until the release of Stranger Things 2. But now, in addition to the news about his son, it's been reported that Heaton has an off-screen romance with co-star Natalia Dyer, according to Us Weekly.

More and more information about Heaton's personal life has been uncovered and fans everywhere are obsessing over what he did before Stranger Things — including his musical background with Matsurra.

Here's a video of their band rocking out to "Love Is The Cure:"

In Comanechi, Heaton played the drums while Matsuura took the lead vocals and guitar in a way NME described as a "fast and furious approach." Heaton, for his part, seemed to really enjoy his time in Comanechi, telling British publication, The Quietus, that it had really changed his life:

I’ve swapped hanging around with teenage douchebags for hanging out with other douchebags. In all seriousness, it’s been incredible. From leaving college - not that I attended that often - to touring with the likes of Gossip and Bo Ningen, and within a month of joining the band playing in front of over 3,000 people, it’s been pretty mental. I didn't expect it. Also I found out I live on the same street as Akiko which is pretty handy. I know that if I wanna go party it’s always five minutes away from my door.

Now, it seems as though Heaton has calmed down a little and isn't rocking out as much as he used to, although he definitely still knows how to have fun.

In January, Heaton was first spotted with Dyer and the two were then "romantically linked," though a confirmation of this has yet to come from either of the actors. Back in March, the two were asked point blank by TMZ if they were together, and they both skirted around the question. Dyer simply said:

Whether people are dating or hanging out, I think that our cast just is cool with each other. I mean, I won’t speak for anybody else but it’s been you know. We’re all one big family.

Heaton, for his part, simply just told TMZ that "Some people like to read into certain things," which really could mean anything. And, as Heaton has made clear himself, there's really no way to know what's actually happening in someone's life. And, as one chart-dominating pop star has recently pointed out, "We think we know someone, but the truth is that we only know the version of them they have chosen to show us." Of course, Taylor Swift probably wasn't referring to Heaton and his past with his ex, their band, and their child. But, it's still an important point.

Celebrities are much more in the spotlight than your average human, but that doesn't mean they owe us their life stories. So, while Heaton and Matsurra may have rocked out back in 2013, what they do now is their own business.