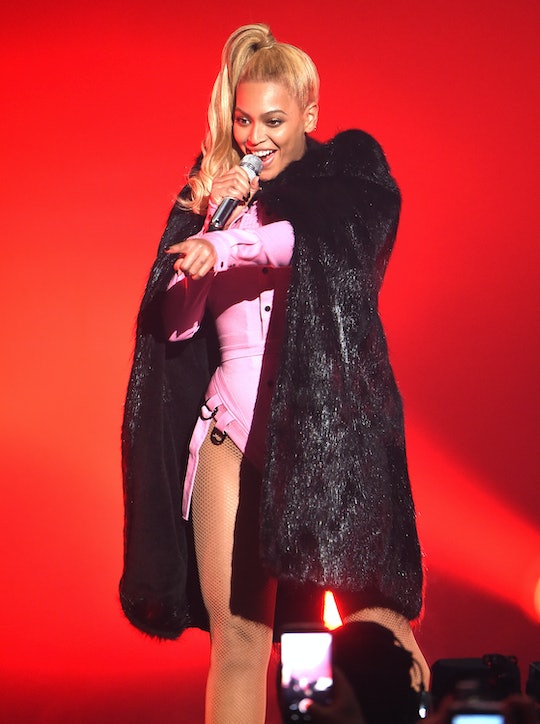 What Beyonce 'Formation' Lyrics About The Illuminati Really Mean

Beyoncé has caused all kinds of conversation with the release of her latest song and video "Formation" and from the very first line of the song she wants fans to know exactly who she is, where she comes from and how she got there, and it's got nothing to do with the Masons or devil worship. "Ya'll haters corny with that Illuminiati mess" she groans, almost laughing off the ridiculousness of the rumors. So let's discuss what Beyoncé's "Formation" lyrics about the Illuminati mean.

It all started with Jay Z and the diamond symbol he makes with his hands to represent his label, Roc-A-Fella. To the foil-hat-wearing set, this was a sure sign the super-successful hip-hop artist was obviously trying to hint at his membership in the Illuminati, a secret society of the rich and famous who worship the devil and just so happen to control the world.

Like most things, it started with a kernel of truth. The Illuminati was an actual thing in 1776 Bavaria. It was a secret society of dudes who joined the Freemasons and, at the time, was the club for men of power and influence to try and steer society away from religion. Since then, the Illuminati has been blamed for everything from the French Revolution to the recent death of Supreme Court Justice Antonin Scalia. The Daily Beast, just last month, ran a detailed article about how the Illuminati became linked with rap and hip-hop culture. The Illuminati were heavy into symbols — the most well known was the pyramid with an eye, which can be found on U.S. paper currency. It's supposed to be the all knowing force that sees and controls everything, like the group's membership. Whatever.

So every time Jay Z tried to brand himself with the diamond hand signal, which Beyoncé also made during her 2013 Super Bowl halftime show, there were those who just assumed they were giving a nod to their Illuminati crew, which is supposed to also include Justin Beiber and Lady Gaga. Again, whatever. Seems far more likey that it's just smart promotion for the family biz, but conspiracy theorists aren't easily swayed.

But why did Beyoncé think the Illuminati rumor was important enough to address in the opening line of the song she dropped like a nuclear bomb right before this year's Super Bowl? I have a theory.

"Formation," from it's opening line about the "corny Illuminati mess," seems to be about setting everyone straight about who and what she is. She's black, she's beautiful, and she's a force to be reckoned with.

Attributing her success to some group of devil worshipers strips Queen Bey of the credit for all of her millions of dollars and legions of fans. She tells us, "I dream it, I work hard, I grind 'til I own it." She wasn't picked out by Jay or anyone else and given a damn thing. You want to know where her power to rule the world comes from? It's all right inside that awesome head of hair.

It's demeaning to Bey as a black woman to suggest that the only way she rose to the level of being an artist causing conversation is because someone else gave her that place. She's slays, and so can anyone else. No membership in the Illuminati required.