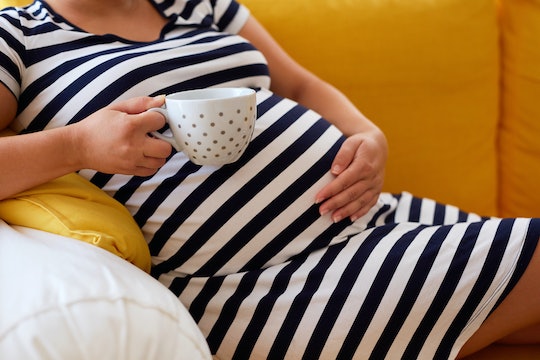 If You're Looking For A ~Magic~ Drink To Induce Labor, Here's What Experts Suggest

Being pregnant is tough business. There's the swelling, the flatulence, the lack of wine, you name it. And I bet if you're searching for ways to induce labor, that means you're ready to try anything to speed things along so you can start labor faster — as long as it's safe, of course. There is a lot of speculation about foods you can eat to induce labor, but what about beverages? What can you drink to induce labor? Is castor oil the way to go, or is raspberry leaf tea more reliable (and tastier)?

The general consensus of holistic websites and pregnancy message boards note that an important factor for a labor-inducing drink is it needs to be something that produces prostaglandins in your body. According to the online medical dictionary, prostaglandins are "unsaturated fatty acid mediators" that cause constriction and widening of arteries and can cause contractions of the uterus. Additionally, foods that stimulate your bowels can theoretically help jump start labor because they could trigger labor contractions.

However, according to Kristen Burris, L.Ac, a women’s health acupuncturist and infertility specialist, there aren't really any known drinks on the market at the moment to "swig back" to induce labor safely. But she tells Romper moms can "try drinking several cups of red raspberry leaf tea, which has been used for a long time to tone, strengthen, and encourage uterine health during pregnancy."

Otherwise, you can make your own drinks with foods that can stimulate bowel movements — which could possibly trigger labor contractions, according to Burris. Try making "delicious smoothies," and this way, you'll have very little risk of having excessive bowel movements. "Labor-inducing/bowel stimulating" smoothie ingredients include garlic, pineapple, mango, and papaya, Burris says. "Additionally, these ingredients have natural digestive enzymes that help create mild cramping and movement in the digestive tract, which could also benefit starting labor," she adds.

As far as what not to drink, Burris says castor oil is at the top of the list. "Long ago, women were advised to drink castor oil, but this often causes digestive distress, hours of cramping, diarrhea, and an increased risk for dehydration," Burris says. "The idea behind the castor oil is it could also trigger uterine contractions in addition to bowel contractions with the purge, but we strongly dissuade patients from ingesting castor oil at all."

So instead of going into labor, you’ll be hugging or sitting on the toilet all night long. No thank you.

Looks like making your own smoothies with "bowel-stimulating" ingredients is the way to go if you want to naturally induce labor by the way of beverages. Make sure you discuss your plans with your healthcare provider first, and that you're at least 39 weeks along in your pregnancy to lessen the risk of complications.