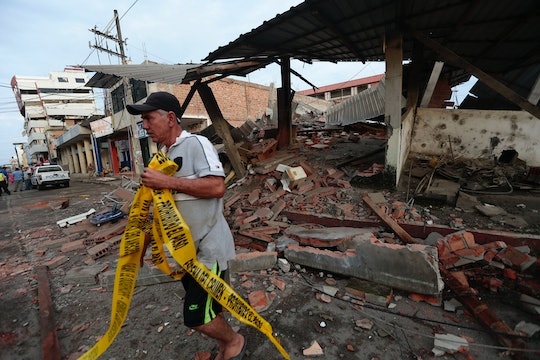 What Caused The Earthquakes In Ecuador & Japan? Both Countries Are Prone To Disaster

Rescue efforts are ongoing and the casualty count is rising Sunday after the strongest earthquake to hit Ecuador in nearly 40 years devastated the country Saturday night, killing at least 235 people. Similarly, the effects of twin earthquakes (magnitudes 6.5 and 7.0) in Japan's Kyushu region late last week killed 41 people and injured another 1,500. Both countries are dealing with a devastating loss of life, structural damage, decimated homes, and displaced residents frantic to locate missing loved ones. The suffering (and, I'm sure we'll see, resilience and strength) of these two beleaguered nations is not all they have in common, though. In fact, what caused the earthquakes in Ecuador and Japan (and the continued tremors in the latter) can simply be attributed to both nations' locations in the seismically active "Ring of Fire," although the distance between the two natural disaster sites means the quakes are likely not related, according to the U.S. Geological Survey.

Many of the world's earthquakes and volcanic eruptions occur along the Ring of Fire, a horseshoe-shaped zone that follows the rim of the Pacific Ocean, Live Science's Denise Chow reported this week. Here, tectonic plates "mash and collide", causing inevitable friction that bubbles to the surface on occasion.

Ecuador fronts the boundary between the Nazca and South American tectonic plates, according to an analysis from BBC science correspondent Jonathan Amos.

"These are vast slabs of the Earth's surface that grind past each other," Amos wrote. "... The Nazca plate, which makes up the Pacific Ocean floor in this region, is being pulled down ... and under the South American coast."

In Ecuador, most recently this tectonic friction likely preceded the magnitude-7.8 quake, which predominantly affected sparsely populated fishing ports and tourist beaches. In Japan, that activity prompted this weekend's series of earthquakes, which in turn triggered many landslides.

But this sort of devastation (and much worse) has been seen before. In January, a magnitude 6.7 earthquake struck Japan's Hokkaido region. And in 2011, a massive magnitude 9.0 quake lasted for a whole six minutes in the the Oshika Peninsula of Tōhoku and caused a gigantic tsunami wave that flooded three nuclear reactors. Japan eventually reported a mind-boggling 15,893 deaths.

Ecuador experienced more than 600 fatalities and 20,000 injuries as a result of the Tumaco earthquake of 1979.

Although these two countries are no strangers to devastating natural disasters — they are, indeed, prone to earthquakes because of their positions along the Ring of Fire — scientists say the most recent events do not signal an epidemic. In fact, The New York Times reports that the timing of the quakes is unrelated, and the number of earthquakes each day worldwide is consistent, not increasing.

That news, however, does not make the destruction and despair the earthquakes in Japan and Ecuador caused any less real for the victims and their loved ones. Both countries have the support of the rest of the world as they begin to rebuild.