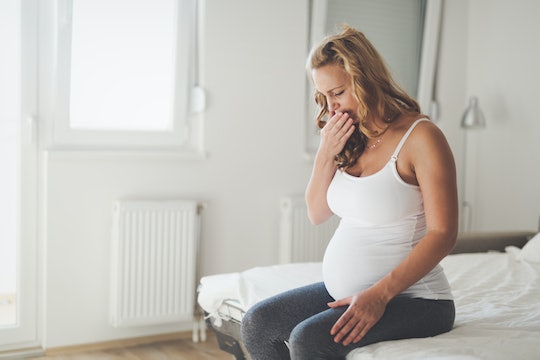 If Your Mouth Constantly Tastes Disgusting During Pregnancy (Sorry), Here's Why

For some women, pregnancy doesn’t just bring on the morning sickness, cramps, and aches and pains. They also get to enjoy feeling like they have a handful of change permanently in their mouths, no matter what they eat or drink. It’s like when you let a pill sit in your mouth for too long, that chemical and metallic taste, and it haunts their waking hours and their dreams. So what causes a bad taste in your mouth during pregnancy? Is it something you’ve eaten? Is this normal, or should you be concerned?

Apparently, it’s pretty common among pregnancy. (Sorry.) “The phenomenon is known as dysgeusia and like most symptoms of pregnancy, it is presumed to be due to the normal hormonal fluctuations that occur,” says Idries Abdur-Rahman in an email interview with Romper. Abdur-Rahman is an OB-GYN and medical travel blogger along with his twin brother Jamil for TwinDoctorsTV. He adds, “While we don’t know for certain what the purpose of dysgeusia is, we presume that the food aversion it creates is designed to prevent expectant mothers from eating things that could be harmful to the baby.” Kind of like why smells are extra pungent and strong while you're pregnant.

Why this particular taste? Abdur-Rahman says every woman will describe the taste differently, whether it’s metallic or a chemical taste. However, “The particular nature of bad taste doesn’t indicate anything more than the normal dysgeusia of pregnancy,” he explains. Gross alert: And unfortunately for some women, that taste — whether described as metallic or like chemicals — will come through when they throw up, making all the foods they ate (and are trying again) taste the same. So sorry for that.

Thankfully, it usually only lasts through the first trimester, and it goes away once you hit your second trimester. But for some women, it does persist throughout the entire pregnancy, Abdur-Rahman says. “It doesn’t indicate anything more ominous at later points in pregnancy, just bad luck.” BabyMed also noted, “The effect of estrogen changes tend to calm down a bit in the second trimester, so the taste of pennies in your mouth will certainly fade as time goes on.”

Is your first trimester going by way too slowly and you can’t deal with this taste anymore? Ready to scrub your mouth out with a brush with rigid bristles? BabyMed recommended eating sour foods, vitamin C drops, and rinsing out your mouth with orange juice — though not right after you brush your teeth, for the love of God.

While extremely unpleasant, thankfully, feeling like you have a handful of change in your mouth during the first trimester isn’t dangerous, and in fact, dysgeusia is perfectly common in most pregnancies — especially in the first trimester. Try rinsing your mouth out with orange juice or sucking on some lemons (if your tummy can handle it) during your first trimester. I hope it ends quickly for you and you aren’t stuck dealing with metallic mouth all nine to 10 months of your pregnancy.