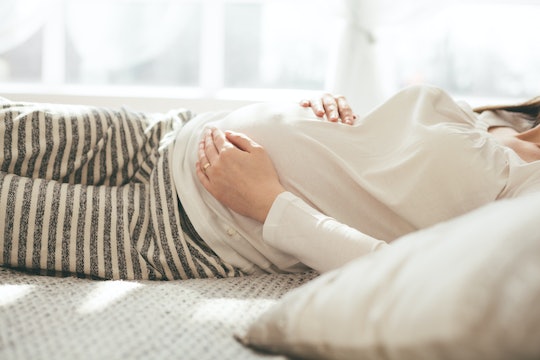 Here's What Causes A Tilted Uterus

Whether you found out you had a tilted uterus because of a painful period or through a routine pelvis exam, one thing's for sure: you're probably wondering what causes a tilted uterus. Is it genetic? Was it a previous pregnancy that knocked your uterus backwards? Was it that summer marathon of roller coasters that tilted your uterus in a different direction?

Don't worry — you didn't cause a tilted uterus. And you should know that having one isn't a big deal. According to Dr. Seth Plancher, OB-GYN at Garden City OB-GYN in Garden City, New York, a tilted uterus is basically normal. "It's kind of like being a lefty," Plancher tells Romper. "It doesn't really have any clinical significance." But why do some women have a tilted uterus and some don't?

If you have endometriosis or fibroids, scarring from any adhesions related to these diagnoses can also cause your uterus to tilt.

In short? A tilted uterus doesn't happen because of anything you've done or tried to do. Sex didn't knock your uterus out of whack and, thankfully, it's not generally an issue to worry too much over. According to What to Expect, you shouldn't even think of a titled uterus as a "condition" or issue. It's simply a "normal anatomical variance." It's also unlikely that your tilted uterus will affect your chances at getting pregnant or affect a healthy pregnancy that's progressing normally. Just count it as one of those quirky things that make your body unique, like your double-jointed thumbs. (Except maybe don't talk about your tilted uterus as an ice-breaker at a party.)