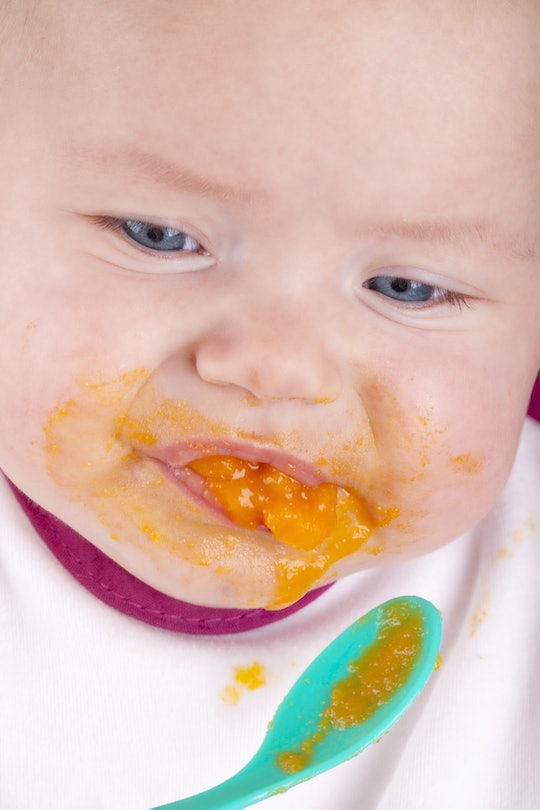 A crying baby is heartbreaking no matter what, but if your little one is suffering from reflux, it's even worse. Knowing what causes infant reflux can help you and your little one cope, but it doesn't necessarily make it any easier. Hearing your baby cry in pain is still hard, right?

One major thing to keep in mind is that pretty much everyone suffers from or has experienced some kind of reflux — it's a pretty broad term. According to Parents, reflux is a natural part of digestion and happens when digested food that has been churning in your stomach acid flows back up into your esophagus. The food and acid can cause pain like heartburn, but if there's enough force behind it, it becomes spit-up.

Mayo Clinic noted that reflux in infants is so common because a baby's lower esophageal sphincter, the ring of muscle between the esophagus and stomach, is not fully mature yet, leading your infant's stomach contents to flow backward. As your child grows, that sphincter will open only when your baby swallows, keeping their stomach contents from traveling back up.

Dr. William Sears wrote for Parenting that acid reflux is also known as gastroesophageal reflux and is a pretty common problem in babies with about 25 percent of all infants experiencing it. It can cause a wide range of issues, from painless spitting up to more severe pain such as abdominal pain and waking up frequently at night. But how do you prevent it in your little one? Is there something that causes it?

Sort of. Honestly, most causes of reflux are simply factors. Mayo Clinic noted that things like an all liquid diet and your baby laying flat most of the time can cause them to experience reflux. These things can't really be avoided and infant reflux generally clears itself up after the first few months of your little one's life. Parenting noted that tricks like feeding your baby in an upright position, offering smaller feedings more frequently, and hand expressing milk if you have a fast let-down can help your little one from spitting up or experiencing reflux.

But if your child's reflux seems more severe, it may require medications or changes to you and your infant's lifestyle. According to Mayo Clinic, some food sensitivities and allergies may be the cause of your infant's reflux and a protein in cow's milk is a common trigger. If you're breastfeeding, KellyMom noted that it could be cow's milk products in your own diet causing the issue.

Your baby's reflux could also be an actual disease instead of just a small issue to deal with. Some infants have a more severe type of reflux known as gastroesophageal reflux disease (GERD) according to Parents. It's not common for a baby to be diagnosed with GERD, but it does happen, and its symptoms include a baby spitting up or throwing up more than usual, being very irritable during and after feedings and choking or gagging while eating. If you think your baby is suffering from GERD, you'll want to talk to their pediatrician as it can cause respiratory problems like asthma or pneumonia.

The important thing to remember is that reflux is normal. Parenting suggests working against gravity as your baby eats (and for a few minutes after a feeding) to see if that helps before assuming your baby needs medical attention for it.