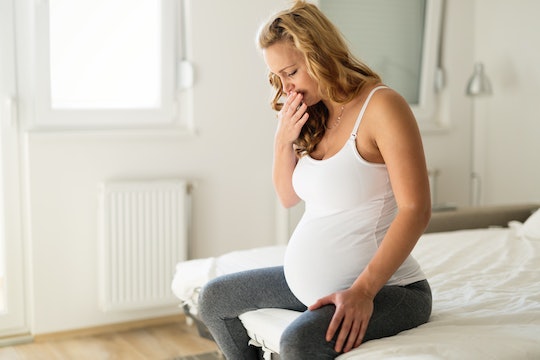 Here's What Causes Morning Sickness, According To Science

The term "morning sickness" was a misnomer during my pregnancies. It was more like "always sickness" or "I'll just sit here with my Zofran and crackers." I was sick all the time. For months. But, what causes morning sickness? Is it just the hormones, or does pregnancy do some other weird ninja stuff to your body that you don't understand?

More Like This
Can You Go Down A Water Slide If You're Pregnant?
Your Guide To Swimming Postpartum
9 Things Not To Say To A Pregnant Woman On Mother’s Day
Here's The Deal With Babies Who Sleep With Their Eyes Half Open

Here's the rub: science isn't sure. I'm not kidding. Decades of research has gone into this field only to tell us there are no hard facts about what causes morning sickness. The thing is that humans are the only mammals that experience morning sickness, and it's not universal. Two women may have the exact same hormone levels, days pregnant, and even blood types, and one may get morning sickness while the other may just breeze through pregnancy. When there's this level of confusion over the etiology of a diagnosis, doctors and scientists will scramble to find the answer. It's just that, in this case, they haven't found one. Why does it exist in some healthy pregnancies and not others? In a study by East Tennessee State University, they asked the question, if morning sickness were an evolutionary imperative designed to protect the growing child, wouldn't all healthy pregnancies have it? Ostensibly, yes. Just like all healthy pregnancies have babies in placentas in the uterus. If all pregnancies develop that protection, why not also this one?

(I feel like this is unfair. The more you get pregnant your body should really just get used to it and shut up since it bleeds every month thanks to not being pregnant.)

Other women at risk? Women with lower incomes and those women who might be older or who have used hormonal contraceptives for a protracted period of time are also more likely to experience morning sickness, according to the study.

Thankfully, the Mayo Clinic wrote that most women's symptoms resolve in the second trimester, giving them plenty of time to make their partners go out at 2 a.m. to cater to weird cravings like Shake Shack burgers with double shack sauce, a custard concrete with double toppings, and no fries, but fried pickles from that one place next door. And until that glorious day, maybe try a few tricks to combat the nausea.