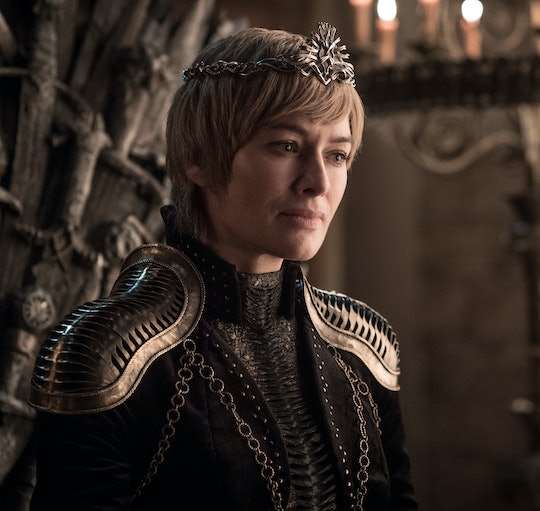 Game of Thrones' final season kicked off last night and there was a lot of ground to cover from every storyline that is moving forward. Cersei didn't get the opportunity to knowingly clutch her stomach in the hopes of someone asking her if she is pregnant, but it was all but implied that she is still pregnant with Jaime's baby. However, Cersei's pregnancy on Game of Thrones could mean that she has more reason than ever to fight for her crown and for control. She is about to have an heir to the throne, whereas before she didn't, which could have made some people uneasy about supporting her.

The system of ruling on Game of Thrones is essentially a monarchy and if Cersei doesn't have anyone to take over the throne someday, then there would be little point to all of the fuss she's making about trying to keep the iron throne and maintain her power. There is the question of whether or not Cersei lied to Jaime and Tyrion about being pregnant, but if we assume that Cersei was telling the truth, she just got a lot more power just by carrying a potential heir to the throne in her womb.

Cersei's pregnancy could also mean that she might be more inclined to help Tyrion and everyone else in the north if it comes to that. She already went back on her word to send Lannister soldiers to Winterfell, but in the Game of Thrones Season 8 premiere last night, Tyrion told Sansa that Cersei has the motivation to help them. Maybe he knows something about the moves she is making that viewers don't, but Cersei's pregnancy could make her change her mind about double crossing Jon again if the dead make it to King's Landing.

One of the things about Cersei's pregnancy that has confused fans, however, is the fact that Maggy the Frog told her when she was a kid that she would only have three children, all of whom have already died on the show. And part of her "fortune" that didn't end up on the show but was told in the books was that Cersei would eventually be killed by a little brother.

For some time, fans have theorized that this meant either Jaime or Tyrion would kill her by the end of the series. Her pregnancy could change that, however. She could give birth to a boy, making him the little brother of her children who have already died. Then, during childbirth, Cersei could lose too much blood and die herself, thereby fulfilling the prophecy about being killed by a little brother and dying the same way her mother did when she gave birth to Tyrion.

If Cersei is legitimately pregnant, it is likely going to play a big role before the next five episodes are over. She has already used her pregnancy as a way to manipulate Jaime and Tyrion, even if Jaime did still leave her to help Jon and Daenerys in their fight against the dead. Cersei is nothing if not calculating and a few steps ahead of everyone else, so this pregnancy will be important in getting her what she wants, if only for a short time. The baby could be her ticket to ensuring her place on the iron throne, especially if she passes it off as Euron's prince he so badly wants. Or, it could be a poetic way for Cersei to finally die after spending eight seasons tormenting other people.

If Cersei lives long enough to give birth this season, I don't think she will last much longer than that. She has been one of the most memorable and well written villains on TV, but she will more than likely die by the end of the season, bringing her awful reign as the queen of Westeros to an end. Until that happens, though, she is probably going to use her pregnancy to her advantage as long as she can.

More Like This
Kim Kardashian Stars In Hilarious House Of The Dragon Parody, The Targashians
Lifelong Teacher Dr. Jill Biden Loves Watching Abbott Elementary Too
10 Parenting Lessons From Abbott Elementary That You'll Want To Write Down
'Workin’ Moms' Season 7 Is Reportedly In The Works! Here’s Everything We Know