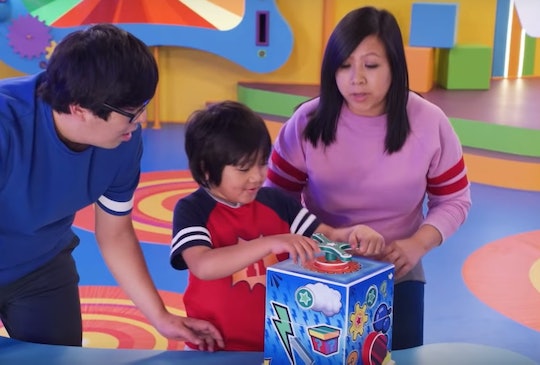 The family behind the YouTube channel Ryan ToysReview made a fortune with videos about unboxing toys and playing with them. They took it a step further when they introduced short skits featuring Ryan Kaji and his parents. Then, Nick Jr. picked up the YouTube sensation for an actual TV show, Ryan’s Mystery Playdate, and it seems the sky’s the limit for the eight-year-old millionaire and star of his own TV show. But if you are tired of your kid being glued to YouTube, you might be wondering what channel Ryan’s Mystery Playdate is on.

In 2019, Nick Jr. premiered the partly improvised show geared toward preschoolers and even older school-aged kids. It airs every weekday at 11 a.m. ET and shortly after its series premiere, Ryan’s Mystery Playdate was renewed for Season 2. Deadline reported that the show had 2.1 million viewers who were kids ages 2-11 over the weekend following its premiere alone, with 5.5 million viewers total.

With numbers like those, I doubt it will be leaving the network any time soon. And just like Ryan made a name and built a fanbase for himself on YouTube, it seems like Nick Jr. was the right place to expand his brand.

Maybe I’m just getting up there in age and I don't understand what kids are into these days. But I will never truly understand my son’s obsession with watching other kids play with toys on YouTube. I have even caught him pretending to be Ryan with his own toys and reminding an imaginary person to "like and subscribe." It was cute at first, but now it has become a phenomenon.

In 2018, NBC News reported that because of Ryan’s YouTube channel, he made $11 million in 2017 alone. He told the outlet he thinks kids love his channel and toys so much because he’s "entertaining and funny." Judging by my son's genuine giggles when he watches Ryan ToysReview or Ryan’s Mystery Playdate, that’s pretty accurate. The YouTube channel, which has 21.5 million subscribers right now and still uploads new content regularly, is still going strong. With revenue coming from YouTube and from Ryan’s Mystery Playdate, I wouldn't be surprised if Ryan’s net worth continues to rise in the next couple of years.

The YouTube channel started when Ryan was just three years old and his parents uploaded videos of him opening and playing with toys. Because kids have some wild fascination with watching other kids play with toys on-screen, Ryan and his parents rose to success fairly quickly. In 2018, Forbes named Ryan as the highest paid YouTube star that year. And this is all before the kid is even out of elementary school.

Ryan’s Mystery Playdate premiered on Nick Jr. in April 2019. Instead of giving the new hit series a break in production, because it was renewed so quickly after its premiere, Season 2 is set to premiere on Nick Jr. on Sept. 30, with barely two weeks in between the Season 1 finale and Season 2 premiere.

Ryan was catapulted into stardom thanks to his unboxing videos, which are a staple of YouTube, and continued to entertain kids of varying ages with his family trips around the world and the skits with his parents. The Nick Jr. show offers a version of this his devoted fans easily transitioned to and new fans welcomed. I don't see an end to Ryan’s Mystery Playdate in sight and if kids have anything to say about it, the seasons will continue to pop up back to back.