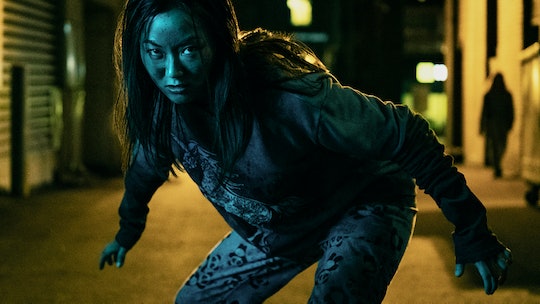 What would happen if superheroes chose to use their powers and celebrity to exploit the system? Well, Amazon's The Boys is about to show you. Developed by Eric Kripke, Evan Goldberg, and Seth Rogen, this black comedy is prepped to embrace a new kind of anti-hero, and trust me, graphic novel fans won't know what hit them. So what comic is The Boys based on? The Amazon series is like the Inception of comic book adaptations. But instead of a dream within a dream, The Boys is a superhero show based on a comic book series, which is also built around well-known tropes from the Marvel and DC universes.

The Boys comic was originally conceived by writer Garth Ennis and artist Darick Robertson. Together, the two creators were inspired by beloved characters from classic comics, and they made The Seven, a team of corrupt superheroes who aren't exactly as honorable as you might think. Per Entertainment Weekly, Ennis and Robertson made Queen Maeve, Black Noir, and The Deep as plays on Wonder Woman, Batman, and Aquaman, respectively. That said, the co-creators also drew from real-life flaws and characteristics to design the members of The Boys.

Speaking with The Beat, Ennis revealed that characterizing the superheroes as "a bunch of sh*ts was a no-brainer, it was just a matter of temptation and corruption." However, he saw The Boys as "actual people — flawed, uncertain, prone to certain excesses." The writer then shared some insight into the series' main anti-heroes. He explained:

The Female is damaged goods, Frenchie is mad as a snake. Mother’s Milk has made a kind of devil’s bargain in order to try to do what’s right. Hughie is essentially a decent wee guy with a couple of serious blind spots, but his total inability to change his nature, like most people in real life but very few characters in comics, is actually what Butcher’s counting on to save the day. It was always very important that try as he might, Hughie would never have a line-in-the-sand moment. As for Butcher, my all-time favorite character I’ve created, he exemplifies the main theme of the book. This is a bad world run by bad men, and it takes another bad man to oppose them.

Meanwhile, Robertson added that the characters in The Boys aren't meant to parody existing superheroes, but rather show how easily things could go wrong.

"It wasn’t about tearing down existing superheroes through parody but to create a contrast, holding up a cracked mirror, to show why the superheroes we love are the characters that they are by showing how awful they might be if they didn’t have a moral center," Robertson said. "Even the best characters in The Boys get seduced by that world of power and celebrity."

Regardless, fans should know that the new Amazon adaptation of The Boys will continue to flesh out the real-life versions of the comic book characters they were based on. And while it doesn't looks like every detail from the original comics will make it onscreen, the new series has Ennis and Robertson's stamp of approval.

"Seeing the love, care, and respect that has gone into this show, with an eye towards honoring the source material it came from, is humbling and validating," Ennis told The Beat. " I can say that everything that is in the show is great. While they haven’t done a verbatim adaptation from the comics, it feels and looks like The Boys and packs a punch."