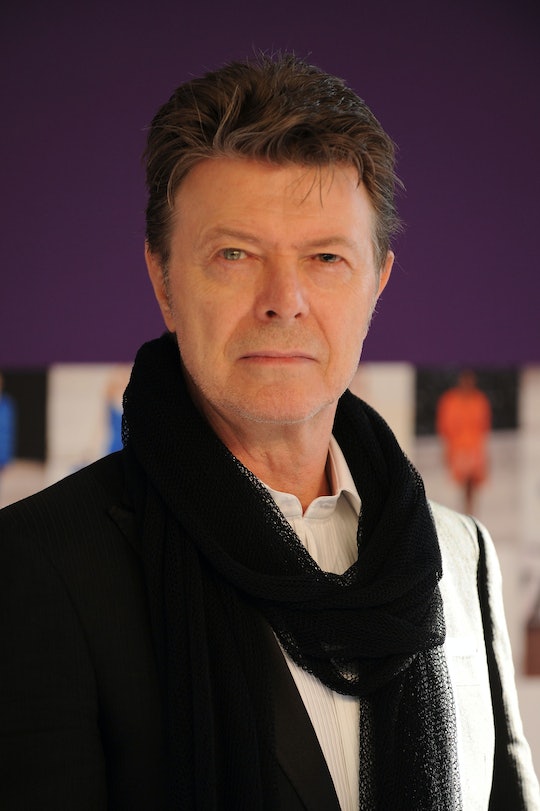 What David Bowie's Career Meant To Queer People, Or At Least To Me

David Bowie’s androgynous style and ambiguous sexuality changed the world, and was an inspiration to generations of queers and weirdos. By being flamboyant in a world that wasn’t always welcoming to it, and creating a seriously amazing catalogue of music, he showed us all what was possible and inspired us to be our best and weirdest selves. As we celebrate what he has meant to us and mourning his passing. I, along with so many others, am reflecting on what seeing a person like David Bowie meant to me as queer person. I was a young, sometimes confused, queer individual, but seeing him live such a public, unapologetic life was one of the most important parts of my youth.

Years ago, a friend and I were joking about making altars for pop icons who really inspired us. We were on a ‘70s glam rock kick at the time, and we were definitely going to make a Freddie Mercury altar. Someone suggested David Bowie, but we couldn't do it. Following the tradition of the Roman Emperors, we decided that pop stars would not be deified until after their deaths, and David Bowie was still very much alive. While so many of my artistic and cultural heroes have already left the earth, it was a strange comfort that Bowie was still around, still being odd, still making art, still existing as a person, not a spectacle. It was a beautiful reminder for me, coming of age and figuring out my own queer identity, to see someone like Bowie be so artfully and wonderfully himself.

I’ve never followed David Bowie's personal life, and to be honest, didn't even know he was sick. But this morning, at the age of 69, David Bowie passed away from cancer. And this afternoon, I am making my David Bowie altar. The mourning of celebrities has always struck me as a little odd — these are people we don't really know after all — but today I am going to mourn a man I have never met. I still don’t fully understand why I feel such a strong urge to do this, but I have to do it. Bowie has been a constant inspiration throughout my life as a queer person, and that matters. Remembering him so publicly (even if it is in the confines of my own home), serves as a testament to the influence his life and his professional work had on me. At a time when advocates were often few and far between, Bowie served as a guiding light, a force for good, a beacon of acceptance.

I was born after so much of David Bowie’s most important work had already been done, but even so, his work and his music changed my life. Growing up in the suburbs of midwestern America, I was surrounded by homophobia and an aggressively heteronormative culture. David Bowie represented not only the possibility of The Other, but the proud existence of it. Here was this person, a person who was strange and over the top and flamboyant and fabulous. He was a man who wore makeup and ridiculous costumes and had really, really gorgeous hair. Rather than living in fear of seeming queer, David Bowie embraced oddity and all the magic that came with it. I had been called “weird” my entire life, and had sometimes feared that weirdness in myself. And rather than being shunned, he was publicly respected as an artist. Even “normal” people could respect and admire David Bowie.

In my own youth, it was a complete gamechanger for me. Without people like Bowie, I might have thought that in order to exist in the world, I needed to change myself, and be more “normal.” But I did not grow up in a world without Bowie. Instead I grew up in a world with Bowie, which for me was a world of adventure and possibility, a world where normalcy never had to be the goal, a world where you could be whoever you wanted.

David Bowie did not change my life in one glorious moment, as he did for many older queer people. Instead, he changed what felt possible for my life in a world that often felt alien to me. If Bowie could be that bizarre, that lovely, that artistic, there was no reason I had to hide in the shadows and try to be normal. He so proudly stood out — and because of that, I didn’t need to fit in. And while I wasn’t a musician, I was a budding young artist, and I could appreciate everything about his public persona, from his work to his hair. But Bowie’s influence wasn’t something I felt alone. His impact stretched far and wide in the LGBT and trans communities, and quotes from friends categorically pay homage to his work, his power, and his support in ways that align to symmetrically with my own views on him:

Dana Neilson, a friend and member of the LGBT community, said:

People like Bowie, Gaga, Freddie Mercury, Elton John, taught me that my identity is ever-changing and always a part of me, even if I don’t recognize myself through all the gaps in time. It's all me, and it’s all OK.

The other morning I woke up with the Bowie song ‘Rock and Roll Suicide’ in my head. I hadn't listened to David Bowie in a long time, but to say the effect he's had on my life was profound would be an understatement. I put the song on and kind of marveled in how sweet and sincere it was for a rock song, the constant insistence that the person being sung to is not alone, beautiful, and unable to see him- or herself properly. David Bowie meant so much to me as a young person, so much to me as a queer person, and in some weird way I feel like I got to say goodbye and be reminded of all the good he'd given me in that moment.

And X-tian Whitfield, another member of the queer community, said:

Over the course of my life, when I've wanted to wear makeup and a dress, to envision my body moving through the world in ways I couldn't articulate — and am still learning to articulate — when I've been in doubt, in fear, when I (still, sometimes) look at my body and ask ‘WTF is this?’ David Bowie has always been there, in my imagination, fearless, and full of love. I don't feel sad today: my David Bowie isn't quite human anyway. I'm so grateful and happy for Bowie’s incredible music, for his love of queerness, for giving us so much joy and being a light.

It wasn’t just Bowie’s music that mattered to me. Growing up (and even now), there are so many David Bowie-inspired makeup tutorials that’ve helped me get over my fear of makeup and embrace the lovely weirdness it could create. (Matter of fact, the tutorial actually appeared on an online mag for teenage girls, and is unabashedly where I learned literally everything I know about makeup.) I once used the eye makeup tutorial so help myself prepare for a “Space Prom” event at my local anarchist collective, which is about the most fun, most queer way Bowie has influenced my life. Bowie showed me that makeup could be glam and fabulous and artistic, rather than just something "respectable women" did to look respectable.

I cannot overstate what that has meant to me, as I reject the dominant version of femininity and embrace a use of makeup that truly resonates with me as a queer woman, I am often picturing Ziggy Stardust as an example of how far I can take all of this.

The world has lost a truly great artist, and today is a day of Bowie. I just listened to “Space Oddity” with my 7 month old and sobbed when he got to that line:

Tell my wife I love her very much,