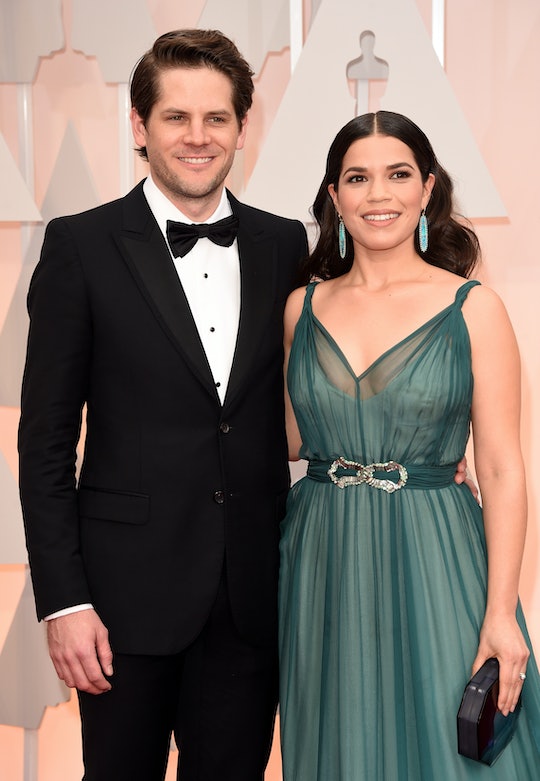 In case you haven't been paying attention lately, it definitely seems like there's been a bit of baby fever going around in Hollywood. And the latest celeb to become a mom is none other than Superstore star and women's rights activist America Ferrera. On Tuesday, the actress announced the exciting news with a beautiful photo that also revealed her newborn's name. So, what did America Ferrera name her baby? The first-time mom and her husband, Ryan Piers Williams, chose a beautifully unique and very adorable moniker for their bundle of joy.

Ferrera took to Instagram today, announcing not only that she had given birth to her first child — a son — but she also shared his name: Sebastian Piers Williams. According to Ferrera's post, the happy family of three is settling in nicely.

"When 2 become 3...Welcome Sebastian Piers Williams - aka Baz!" she wrote alongside a seriously sweet photo featuring Sebastian's tiny little foot. "Mom, Dad, and Baby are happy, healthy and totally in love!" Ferrera and her husband posted the same image to their respective Instagram accounts, with Williams using the same caption as his wife.

The two are obviously quite smitten with their new addition to the family, and it's totally easy to see why. While baby Sebastian might not have made his full debut to the world just yet, his tiny little toes are proof that this baby is already a heartbreaker.

Although it's unclear whether the name Sebastian carries any special meaning for the family, it seems quite obvious that the couple wanted to pay homage to Williams as they chose the same middle name for their baby as the 37-year-old Texas native. While some might wonder if Ferrera chose the name Sebastian as a way to honor a particular family member, it doesn't appear to be the case.

There doesn't seem to be any actual connection between Ferrera and the name Sebastian. However, the meaning of the name may be more of a reason why the couple chose it. According to SheKnows.com, Sebastian is a Latin baby name that means, "Venerable; revered." Considering how much of a mark Ferrera has already made on the world, it makes sense that she would want her son to also carry a strong sense of purpose as he grows up.

Additionally, looking back at Ferrera's career, the name Sebastian might also be a nod to her early acting days. As Inquisitr noted, "The young America Ferrera began to dabble in acting when she participated in her school’s productions of Hamlet, Oliver!, and Romeo and Juliet." Now, in case you weren't aware, both Hamlet and Romeo and Juliet are works of the one and only William Shakespeare, who also happened to be the brains behind the iconic play Twelfth Night.

In Twelfth Night, one of the main characters is named Sebastian, and according to SheKnows.com, "In Shakespearean the meaning of the name Sebastian is: Twelfth Night', also called 'What You Will' Brother of Viola." So perhaps Ferrera wanted to give a subtle nod to her very early acting days.

However, according to her post, the couple will be calling their little bundle of joy a nickname: Baz. And per SheKnows.com, Baz has an entirely different meaning than Sebastian, although it's clear that the shortened name comes from Sebastian. Nevertheless, Baz is a Greek name which means "royal," according to SheKnows.com. So maybe Ferrera and Williams just want their son to have a regal air about him. And after how much the royal family has been in the news recently, who could blame them?

Whatever the case or the meaning behind little Sebastian's name, one thing is obvious, and that's that the little boy is seriously loved.