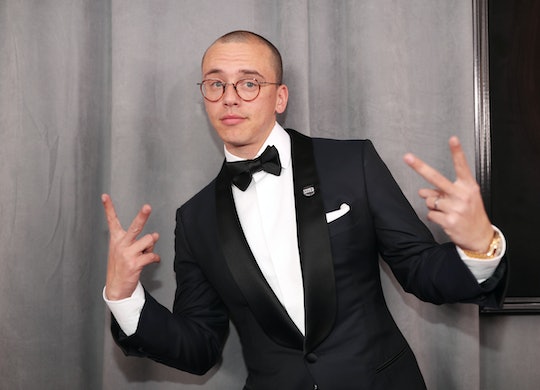 Logic's Speech At The 2018 Grammys Was Powerful & Resonating

Awards shows are for a lot of things, especially performances, but there's also room for activism — something the music industry has supported since the very first person wrote down their feelings and sang them. It's no wonder the entire world was anticipating Logic's performance of "1-800-273-8255," his hit song for suicide prevention and awareness. The title of the song is the actual number for the National Suicide Prevention Lifeline, but Logic does more than just sing — he shares empowering messages, too. So what did Logic say at the 2018 Grammys? His words truly resonated with everyone around him:

"Black is beautiful. Hate is ugly. Women are as precious as they are stronger than any man I ever met. And unto them I say, 'Stand tall and crush all predators under the weight of your heart that is full of the love they will never take away from you. Be not scared to use your voice, especially in instances like these where you have the opportunity. Stand up and fight for those who are not weak, but have yet to discover the strength that the evil of this world has done its best to conceal.' To all the beautiful countries filled with culture, diversity, and thousands of years of history, you are beautiful. You are not sh*tholes. And lastly, on behalf of those who fight for equality in a world that is not equal, not just, and not ready for the change, we are here and I say unto you, bring us your tired, your poor, and any immigrant who seeks refuge. For together, we can build not just a better country, but a world that is destined to be united."

I mean, chills, right? The minute Logic started talking about immigrants and all the beautiful countries in the world, the crowd lost it. Cheering, yelling, and even those Logic brought with him on stage joined in. Along with Alessia Cara and Khalid, the song's collaborators, Logic's 2018 Grammys performance included filling the stage with suicide attempt survivors and friends and family members of those who tragically lost their lives to suicide, reported Los Angeles Times. It was an incredibly powerful and moving way to further spread his activism — by showing what suicide really looks like to those who may never have experienced it. It's not a plague on only those who are poor, who are abused, who are alone, who have severe mental health diseases — suicide can and has affected every person from every walk of life in the world. And Logic's speech and performance made it abundantly clear — it's everywhere, but everyone everywhere matters, too.

I truly think that's what I loved most about Logic's speech. It wasn't just a speech about making sure you love yourself or that you take care of your mental health. It was a speech of positivity, about spreading love to those who don't always feel it. To those whose skin color has been mocked, to immigrants who feel they aren't welcome anywhere, to women who are terrified to speak up, to those who don't know their own strength, to those who haven't had trauma happen to them, but use their privilege to help others — everyone was accounted for.

While Logic may not be a politician, his role as a musician has been just as powerful in some ways. His song has given people hope, has given them a number to call, and his speech has reminded them that they are worthy. That together, all of us, can form a more perfect union — one that cares for each other, loves each other, and finds worth in each other. And if that's not the one thing to truly applaud at the Grammys, then I don't know what is.