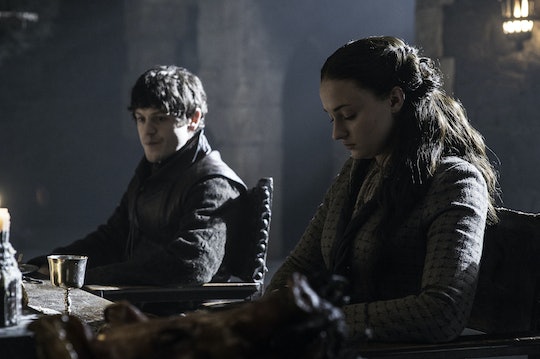 What Did Ramsay’s Letter Say On ‘Game Of Thrones’? It Was A Warning

If anyone out there has been waiting for #BastardBowl... you might be in luck. Ramsay Bolton, new Warden of the North, has just thrown down a pretty serious challenge to our beloved Jon Snow. So what did that letter Ramsay sent to Jon Snow say? It was a whole lot of nonsense with a considerable amount of throwdown, and it was terrifying.

Fans of the book will remember "the pink letter" — a letter from Ramsay Bolton addressed to "Bastard" and delivered to Jon Snow. Fans have been anxiously awaiting the letter so that "#BastardBowl" (the war between Ramsay and Jon, both bastards, and also, I really hate calling them that) can finally begin. As much as we've loved seeing Jon Snow killing it at The Wall, let's face it, we're all ready to see him move on. To go back and reclaim his homeland, Winterfell; certainly his sister Sansa is on board (I could watch the scene of them hugging each other in slow motion for at least six hours).

Before the letter arrived at The Wall, Sansa was trying to convince her brother to go back and take Winterfell from the Boltons, but Jon was on the fence; he was "done killing," and let's be fair, he was dead only a few days ago. Things weren't looking too good for #BastardBowl... and then came the letter. Sealed with pink wax, which makes it seem welcoming but no, it is not.

So here is my paraphrasing of the letter: Hey, it's me, Crazy Ramsay Bolton. I'm the Warden of the North now because I killed my dad for not loving me enough. I have your little brother Rickon, and I'm going to do some messed up things to him. Also his direwolf is dead and good luck finding another one, you know how hard those things are to find. You have my wife (also your sister) and I would like you to give her back to me so I can continue to do some messed up things to her. I'm going to come to The Wall and kill all of the people you like there if you don't let me mess with other people you love here in the place where you grew up. So... that's it, I guess. Bye.

It may not have been verbatim what Ramsay wrote, but it's definitely what he meant, you know?

Jon, being the gentleman that he is — especially because we don't know if Sansa told him exactly what Ramsay did to her, and Theon, and countless others — tried to keep the letter from Sansa. But he and his new man bun were no match for her. The venom in her eyes, Jon's guilt, and the love of their precious little brother in the hands of that monster can only mean one thing: #BastardBowl is on!