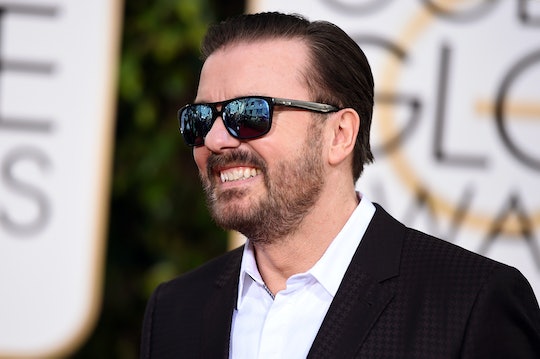 What Did Ricky Gervais Say To Mel Gibson At The Golden Globes? The Censored Part Was Very Him

Ricky Gervais, it seems, has a vulgar sense of humor (though who's actually surprised.) This became clear when Gervais said something to Mel Gibson at the 2016 Golden Globes that NBC felt the need censor out. And of course, everyone watching at home was dying to know what exactly the eccentric host had to say.

Luckily, in the age of Twitter, the answer isn't too hard to find. Amy Kaufman provided us with Gervais' line: "What the f--k does sugart--s even mean?" Ah, yes. Something so classy for a black tie affair.

What I'm more curious to know now is what Gibson's response was. Was he able to define the offensive term to the British comedian? And also, I'm pretty sure the term is self-explanatory. Terrible, but understandable nonetheless.

This bleeped-out question is just one of many offensive things Gervais has been spewing all night, especially when it comes to women. The quote was in reference to a 2006 arrest in which Gibson referred to a female cop with the degrading name. So, it was a pretty tasteless joke, especially to be brought up on stage, telecast to the entire world. But, there you have it folks.

Alan Cumming's reaction to the utterance pretty much sums up what we're all thinking: