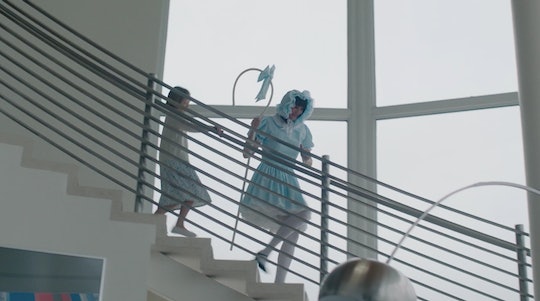 Renata's Child Therapist Dressed As Bo Peep To Talk To Amabella, But Is That A Thing?

If you watched Episode 3 of Big Little Lies, you may have been just as flabbergasted as I was when you saw the child therapist dressed in a head-to-toe Little Bo Peep ensemble waltz down Renata's stairs with Amabella about 15 minutes into the already tense episode. The therapist's outfit sparked me to question why on earth I had never heard of child psychologists in costume before. Logically, it makes sense that a child would relate to a child-like character more than an adult doctor, but is this a thing that happens in real life?

I spoke with Dr. Kathryn Smerling, PhD, a family therapist practicing in New York, about the practice of child psychologists in costume and her reaction to the Episode 3 scene. "That was hilarious, but I have never in my entire life encountered anything like that," Dr. Smerling says. "It was unsettling for me to watch. It seemed as though you didn’t know who was the patient and who was the therapist."

The therapist on Big Little Lies referred to herself as "Dr. Peep" and claims that she and Amabella had "such wonderful fun together." So much fun in fact that Amabella asks if she can sleep over, but alas, Dr. Peep says she must return to her sheep. Once Amabella is out of ear shot, Dr. Peep breaks character to explain to Renata and Gordon that their daughter is "worried about the end of the planet" thanks to a classroom discussion that caused a massive anxiety attack and landed her in the emergency room. She says that Amabella also confessed worries over her parents' stresses, but says that it is "mostly the end of the world" that is causing Amabella to be in distress.

Clearly, in the case of this television drama, the therapist dressed as a character was able to pull out of the fictional second grader what was truly causing her stress. But does this strategy really work in real life? Dr. Smerling says that while dressing up to interact with kids can be incorporated into a child therapy session, there are several reasons why a therapist would not attend a session dressed in the sort of costume portrayed on Big Little Lies, and the biggest one has to do with the development of trust.

"You do play dress-up with kids, but you don’t come dressed up because then you’re a fantasy character. Even if they are in that stage of development where fantasy means more than reality, you don’t play into their fantasies," says Dr. Smerling. "You say you are going to put on a hat when you get there, you can bring a hat with you maybe and say, 'This is the Cinderella hat' or 'This is the wishing well hat' but to actually come dressed up as a therapist and to do a home visit dressed up is really unsettling."

There have been published studies about the power of pretend play as it relates to successful therapy sessions with children. One such study titled "Psychotherapy with a 3-Year-Old Child: The Role of Play in the Unfolding Process" published in the journal Frontiers In Psychology in 2016 stated, "The development of play is an important milestone in childhood. Play holds a crucial role in providing a safe, caring, protective, confidential, and containing space where children can recreate themselves and their painful experiences through a process of self-cure."

So pretend play is definitely incorporated into child therapy, but Dr. Smerling explains that children must develop trust when working with a therapist and that the type of behavior displayed in Episode 3 is not indicative of trust building between a child and an adult. "I thought it was very disturbing because the idea of a therapist is you’re learning how to trust each other — you come in as an adult and you’re building trust with a child — but she came in as a fantasy figure. How do you build trust with a fantasy figure?"

The idea that Dr. Peep was role playing simply to allow Amabella space to pretend play and express her feelings is a definite possible explanation for the inclusion of an unorthodoxly-dressed therapist on the show, but there is truly no way to be certain. While my children love Bo Peep as much as any kid might, I'm not sure I would be turning to a therapist who utilizes this type of characterization in order to ensure that my kid is able to trust adults in a clinical setting and work through the issues that they truly need to address in a productive way.