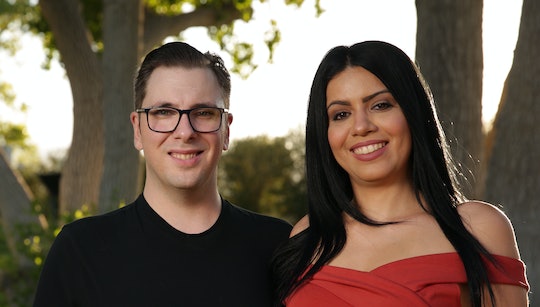 Colt and Larissa's relationship has not been 100 percent stable at any point during 90 Day Fiancé — and Colt's friends certainly didn't help with that. There has been tension between Colt's buddies and his bae all season long, and it's made wedding planning hella stressful. So what do Colt's friends think of Larissa after 90 Day Fiance?

As this season of 90 Day Fiancé has gone on, Larissa and Colt have dropped plenty of hints that their 90-day engagement resulted in a marriage. As dictated by her K-1 visa, Larissa had to decide within 90 days if she want to get married or return to Brazil. Based on Instagram posts that implied Larissa was still living with Colt in Las Vegas as recently as this month, it seems likely that Larissa and Colt have tied the knot. It's unclear if those in Colt's life who didn't get along with Larissa have changed their minds since the couple allegedly got married — but it would be a pretty big change of heart after the most recent episode.

In this past Sunday's episode, titled "No Way Out," Larissa went wedding dress shopping with Colt's mother Debbie, Colt's cousin Lea, and Lea's baby daughter. Lea did a great job as the Switzerland at the shopping appointment, happily supporting both Larissa and Debbie's points of view.

Unfortunately, things didn't go quite as smoothly between Larissa and Lea's husband, Colt's cousin John, who had it out in a huge fight during the episode. This wasn't really surprising for most viewers, since the two butted heads the first time they met earlier this season, too.

During "No Way Out," John, Lea, and their young children all came over to Colt, Debbie, and Larissa's house for a barbecue. "I don't think that they love each other, I don't think that they are meant for each other, and I don't think she actually appreciates everything that he does for her," John told the cameras during the gathering. He and Lea's main beef with Larissa is the way she feels about Debbie, and the manner in which Larissa is trying to move Colt away from Debbie.

"You should feel like a damn queen with a rock like that," John said dramatically, gesturing towards Larissa's engagement ring, "but no, you take advantage." Larissa burst out laughing, explaining that Colt has nothing to take advantage of — his car isn't even air conditioned, after all. "That b*tch is for his money, period," John said. The argument continued to escalate, culminating in Larissa declaring: "Who is against the queen will die!” and uninviting John from their wedding.

Even though most evidence points to Larissa and Colt being married, it's unclear if John and Lea actually made it to their nuptials or not. They both seem to have Colt's best interests at heart, so hopefully things have calmed down since John and Larissa's big fight and they've all found a way to get along.