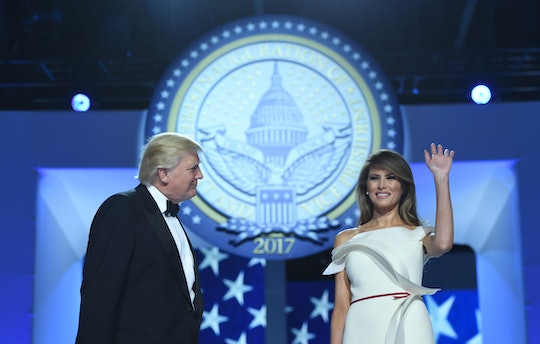 Not a lot is known about first lady Melania Trump's parents. The FLOTUS has been exceedingly private about her family life — so much so that Melania accused a GQ journalist of having "an agenda" when she reported details about her loved ones. The proclivity for privacy could explain why the media had made much of her mom and dad's presence at the inauguration for Donald Trump, who's now the 45th president of the United States. But that has led to people to also ask an important question: What do Melania Trump's parents think of Trump himself?

The answer: No one actually knows — or at least, no one outside her very close circle knows. Although Melania's parents were spotted at the inauguration, they haven't come forward with their feelings about her husband, President Trump. Her hometown in Slovenia, however, did hold a three-day celebration in honor of the inauguration and to showcase where the first lady was born and raised, according to the Us Weekly. Officials of Sevnica, located in Central Slovenia, organized a market of locally made goods and offered visitors free guided tours through the industrial river town. As noted by multiple news outlets, the official tourism website for Slovenia has also declared Sevnica "the town where the First Lady of the United States grew up."

Here's what we do know about Melania Trump: The first lady was born Melania Knavs in April 1970. She grew up with her older sister, Ines, in Slovenia while it was still a part of the Yugoslav federation. It has been widely reported that her father, Viktor Knavs, sold auto parts, while her mother, Amilija Knavs, worked as a pattern maker at a textile factory that made kid's clothes. However, Trump's camp told Reuters reporters back in February of last year that her dad managed a car company and her mom designed clothes. And although reports have surfaced that Viktor Knavs was a card-carrying Communist, Trump's team vehemently denies this allegation.

Much of what is known about them has come from deep reporting — most notably, by journalist Julia Ioffe, who, as previously mentioned, dug into the first lady's life for a GQ profile published in April of last year. Melania denied what was revealed about her family in the article and lashed out against Ioffe in a Facebook post. Taking a page out of her husband's book, the first lady claimed Ioffe's feature was "another example of the dishonest media and their disingenuous reporting." The damage was done: Trump fans sent Ioffe a wave of death threats and anti-semitic threats, and although Melania later called the threats an overreaction, she also claimed Ioffe provoked them.

Melania's parents now live in the United States, splitting their time between New York City and Florida. They're barely in the spotlight, and have avoided interviews with the press. So what they think about their son-in-law is anybody's guess.