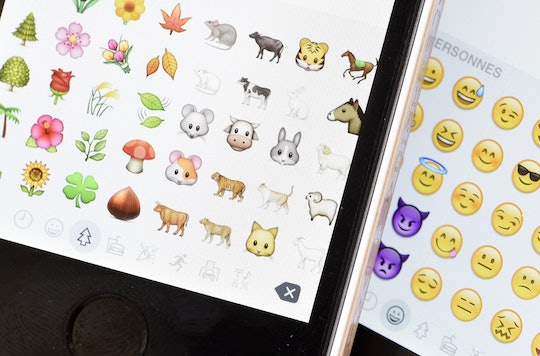 What Do The Facebook Emojis Mean? They Represent More Identities

Facebook recently rolled out its new emojis aimed at providing more diversity in skin tones and the way women are represented in society. So, if you are an avid emoji-user, and love the way it adds to your Facebook conversations (like the handy thumbs up or thumbs down option), you may be wondering: What do the Facebook emojis mean? There's more diversity, for sure.

The tech giant previously announced it would be rolling out its new emojis on June 2, allowing Facebook messenger users access to emojis representing more skin tones and more options that highlight women in different roles, including a police officer, jogger, swimmer, and surfer. In a post on June 1, Facebook announced the motivation behind creating these new emojis:

Messenger is bringing over 1,200 newly designed Messenger emojis to the world. The new designs, gender-agnostic options and multi-colored emojis will be available on many Android devices and web products for the first time. We're diversifying the genders to create a more balanced mix that's more representative of our world. Now, using Messenger emojis, you'll see a female police officer, runner, pedestrian, surfer and swimmer for the very first time, and we'll keep rolling these out.

The new emoji option allows you to select the skin tone of your preference and set it as your default skin tone setting moving forward.

This is not the first time emoji diversity made its way into the conversation. Last month, Google employees proposed new emojis depicting women representing a larger sample of professions, in areas like, healthcare, science, education, farming, food service, and music.

“...We believe we can have a larger positive impact by adding 13 new emoji that depict women across a representative sample of professions,” a part of the proposal read according to TIME. "We believe this will empower young women (the heaviest emoji users), and better reflect the pivotal roles women play in the world."

Last year, Apple introduced new skin tones to its emojis, allowing users to select up to six varying skin tones. While the progressively more inclusive emoji options across all platforms and companies aren't representative of all identities, many believe it's a step in the right direction.

Facebook's new emojis will be standard for all messenger users across Android, iOS, or other platforms. So for those who despise those awkward question-mark-filled boxes in place of an emoji – don't fret, the new emojis can be seen by anyone. Here's to more representation... in emojis, the media, workforces, and beyond.