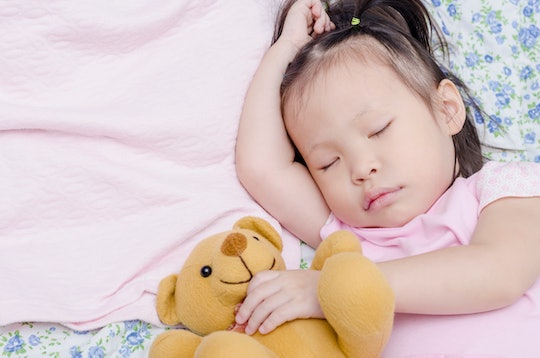 They May Not Remember Them, But Here Are The Types Of Dreams Your Toddler's Having

When your child is a baby, their lack of ability to communicate means that much of what happens in their head is a complete mystery. But once your child becomes a toddler, you get a small glimpse of what's running through their minds. But what do toddlers dream about? Those little ones are notorious for talking your ear off, asking a lot of off-the-wall questions (seriously, a lot), and they also love to tell stories. Some of these stories might just include descriptions of what your toddler is dreaming about.

Toddlers sleep approximately 12 to 14 hours each day, according to Kids Health, which usually includes a one to three-hour nap. The toddler years are when active dreaming begins, which means that dreams happen during periods of REM sleep (Rapid Eye Movement), or active sleep, according to The National Sleep Foundation. Because toddlers sleep so much, they cycle through more periods of REM sleep than adults, so they are likely dreaming frequently even if they do not always remember their dreams.

So, they're definitely dreaming, but what are they dreaming about exactly? Just like adults, kids dream about what they know. "There is truly no limit to the thematic content of dream activity with the exception of what a toddler has been exposed to," Dr. Daniel S. Lewin, Ph.D., D.ABSM, CBSM, associate director of Sleep Medicine at Children’s National Hospital, tells Romper. "Dreams are critical for consolidation of learning and memory and working through both every day and complex daytime emotional and mental challenges."

Yes, they may babble to you when they wake up that they dreamed about Daniel Tiger jumping over a bowl of cereal (No? Just my kid?) and it probably won't make much sense to you. However, it would make sense that they ate cereal and watched Daniel Tiger at some point in the recent past before falling asleep, causing them to dream about these things.

Lewin says that the content of toddler's dreams is related to not only what they are exposed to, but to their individual experiences as well. "If they have had a challenging day with a peer or sibling or are going through a development change (e.g., saying few words to full sentences), their dreams may reflect these changes and exposures," he says.

Although toddlers tend to dream about what they know or are experiencing, nightmares or scary dreams can happen. As a parent, reassuring your toddler when they wake from a scary dream is priority number one, but according to Dr. Lynelle Schneeberg, a sleep psychologist and a Fellow of the American Academy of Sleep Medicine, there may be more at play when your toddler comes to you and says they've had a bad dream.

"Toddlers often have creative and interesting dreams that weave the daytime content in and they also have scary dreams and need some reassurance from a parent after waking," Schneeberg tells Romper. "Toddlers sometimes also use the 'I had a bad dream' report as an 'admission ticket' to their parent's bedrooms." She says this is especially true of parents who stayed with their toddlers as they fell asleep. "So the child wakes to find the parent gone, needs to be near a parent to return to sleep again, and then the toddler reports a bad dream to get into the parent's bed so he/she can get back to sleep again."

Even though toddler speak is often disjointed, jumbled, and hard to understand, it's important to create space for your toddler to share about the dreams they are having as part of the child development process. "Setting aside quiet together time with no distractions (particularly electronics) will give the child and opportunity to communicate their experiences," Dr. Lewin says. He suggests leading less verbal toddlers through role-playing with dolls and facilitating conversation by asking questions or drawing and using pictures as a means of expressing what they're dreaming about.