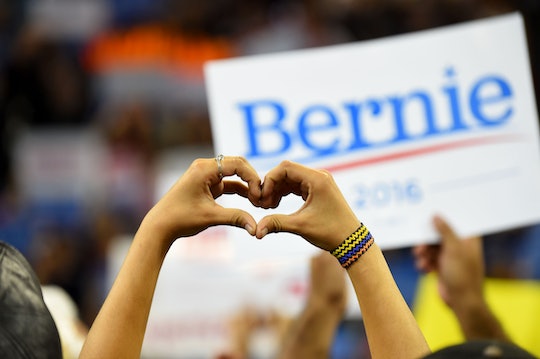 What Does "Bernie Or Bust" Mean? It Could Make A Trump Presidency More Likely

Everyone loves an underdog, don't they? Who wants to watch a movie about a politician who was born into privilege, never had to work hard and bought themselves a presidency? Almost nobody, that's who. But an underdog is another story entirely. Someone who has to overcome great odds, who is challenged at every turn and never gives up, someone who has the courage to stand by his convictions...now there's a guy people can root for. Which is what the recent political movement "Bernie or Bust" really means. It's all about getting behind a man who has been fighting his entire life for his beliefs — but it does have some problematic points.

At a recent rally in California, when Vermont Senator and Democratic presidential hopeful Bernie Sanders was pledging to do "everything he can" to keep GOP Presidential candidate Donald Trump out of the White House (even to the point where he would openly support his rival, former Secretary of State Hillary Clinton, should she be the victor after July's Democratic Convention), the crowd erupted with cries of "Bernie or Bust." This "Bernie or Bust" movement is a promise by die-hard Sanders followers that they will not vote for Clinton if she is the nominee, splitting the Democratic Party and (potentially) giving Donald Trump national traction to become president.

Sanders, the Jewish son of a Polish immigrant and the longest serving Independent in United States history, has run a campaign based on "we" rather than "I," and it has earned him near rock-star status with voters who were simply tired: tired of working long hours for little money, tired of Wall Street billionaires running their country, and tired of not being able to trust politicians. Sanders has refused to "beg money from Wall Street billionaires" to fund his campaign, instead relying on massive amounts of small donations (the average amount of donations to the Sanders campaign is $27, and to date his office reports more than eight million individual donations). And Sanders prides himself on being the only nominee without a super PAC — an independent, often anonymous political committee that supports its favored nominee by financing ads, both favorable for its nominee and negative for the opponent.

Some political pundits worry that this "Bernie or Bust" movement could cause serious issues for the Democratic Party, citing the 2000 election when Ralph Nader refused to support Democrat Al Gore against GOP candidate George W. Bush, splitting the party and delegitimizing the candidate. But Bill Scherr of Politico doesn't think it will come to that.

He became a Democrat to run for president instead of keeping his “(I)” and following in Nader’s footsteps. He has pledged to support Hillary Clinton if she wins the Democratic nomination and has ripped Donald Trump at every opportunity.

Sanders has promised to stay in the game until the bitter end, whatever the outcome. He will continue to fight for real change no matter how many times he is spurned or dismissed as being unabashedly idealistic. And if he loses, he will leave behind a legacy of political revolution. He has set the barre high for candidates with his dogged tenacity and vision of a different future. And most importantly... he woke everyone up. Bernie or Bust shows Sanders' important effect on this election, but it also shows a kind of obstinance that Sanders himself isn't showing. One can only hope that, if Sanders doesn't get the nomination, his followers will support his wishes that people support Clinton and keep Trump out of the White House. Because a Trump presidency would hurt far more people than some Sanders' supporters seem to realize.