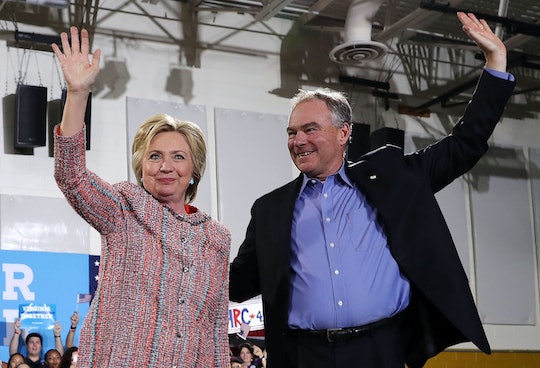 After Hillary Clinton announce Friday night that her running mate in the will be junior Virginia Sen. Tim Kaine, many Democrats expressed disappointment, or just that they weren't particularly jazzed by the choice. But the opinion of one Democrat, Clinton's main challenger in the primaries, is probably of more interest than most. So what does Bernie Sanders think of Tim Kaine?

Sanders has yet to comment on Clinton's VP pick, but Charles Lenchner, co-founder of People for Bernie, told PBS that Bernie supporters aren't energized by Clinton's choice. "Many of us were waiting for Hillary Clinton to excite the base of voters who supported Bernie Sanders," he said. "By choosing someone who is more centrist than she is, [Clinton] is making a signal that the gains we seek inside the party are not yet complete."

It's clear that many of Kaine's positions are far more centrist than Sanders', and Sanders can't love that Clinton chose Kaine over more progressive options like Massachusetts Sen. Elizabeth Warren. Sanders has said throughout the lead-up to the Democratic National Convention happening in Philadelphia next week that his focus is on getting progressive policies into the party's platform. Selecting Kaine doesn't communicate that Clinton's camp is making progressivism a priority.

As Politico points out, there are several issues on which Kaine represents a less than ideal choice to Bernie supporters and, theoretically, the Vermont senator himself. He supports the Trans-Pacific Partnership trade deal, something Sanders has vehemently opposed. Kaine is also personally against abortion, although he has voted in Planned Parenthood's favor.

On Twitter, many Bernie supporters voiced their disappointment with Clinton's choice of running mate:

but others vowed to work with Clinton and Kaine and keep their eye on the prize:

Sanders will likely weigh in on Kaine in some way in the coming days, but for now, it's safe to say that Kaine is a more center-of-the-road choice than he would have liked.