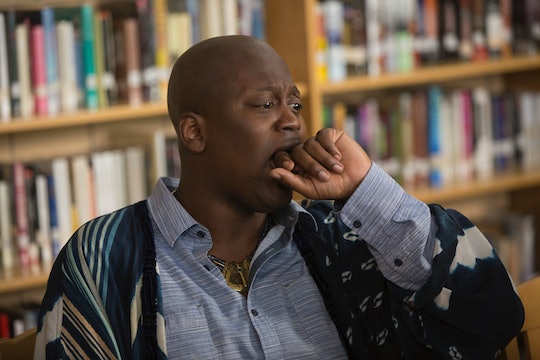 Beyoncé May Have Some Thoughts About Titus' 'Lemonade' Parody

Anyone who watched the trailers for Season 3 of Unbreakable Kimmy Schmidt knows that one of the big things to look forward to was Titus’ Lemonade parody at some point. Luckily, fans didn’t have to wait long to see it, but what does Beyoncé think of Titus’ Lemonade parody on Unbreakable Kimmy Schmidt? I think it’s safe to say that it was pretty epic and even surprising that it went beyond just the one tribute song as Titus confronted Mikey about what he thought was infidelity. So it definitely makes you wonder what Beyoncé herself, or Queen Bey, if you will, thinks of it.

She hasn’t said anything about it yet, but that’s probably because she’s also a super busy superstar with a growing family and two twin babies on the way. And Tituss Burgess (Titus) even said as much in an interview with E! News, in regards to what Beyoncé thinks of his Lemonade parody. “I should be so lucky. I am obsessed with her, like the rest of the world,” Burgess admitted. “I know Tina Fey is a huge Beyoncé fan. But no, I don't, I don't [expect to hear from her]. I just hope that she watches the episode, but look she's about to pop out twins though, so I'm not sure that Titus's homage to her is on her radar right now."

That’s fair enough, but with how epic the tribute to Lemonade turned out to be on Unbreakable Kimmy Schmidt, it would be amazing if she did get the chance to see it.

Burgess himself, though a Beyoncé fan, wasn’t too crazy about the idea of recreating the part of the visual Lemonade album that had him submerged in water. According to Burgess, it was the hardest part about recreating Lemonade. “I don’t swim,” he told TVGuide.com. “So that was not fun.”

But he's always been a huge Beyoncé fan, pretty much like the rest of us. So even if she never sees his Lemonade tribute, he at least got to play out part of a visual album that had him virtually speechless when it premiered on HBO in 2016. In a reaction video to her album that he posted on his Instagram at the time, Burgess said that “To even say it was good or amazing or whatever… that’s like an insult.”

Even though Beyoncé hasn’t really said anything about Titus’ Lemonade parody on Unbreakable Kimmy Schmidt, I have to believe that she would love it and Titus as much as the rest of us, because how else could he initiate a breakup other than something so awesomely dramatic like that?