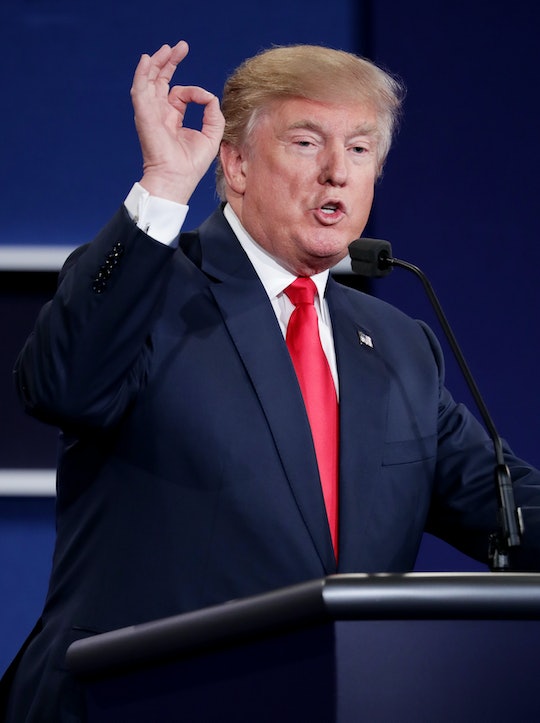 What Does "Bigly" Mean? Trump Has Confused Everyone

During the 2016 debates, Republican presidential nominee Donald Trump has had a few slips of the tongue, but none of them have confounded the American public more than his use of the word "bigly." So what does "bigly" mean, anyway? Is it a noun? An adjective? A verbal tick? Since it's the final debate of the election season, Americans may never know. It's really unclear. During the first debate, Trump said, "I'm going to cut taxes bigly," and referring to Democratic presidential nominee Hillary Clinton, said, "and you're going to raise taxes bigly."

At first, it seemed like maybe everyone had misunderstood. Maybe it was a suppressed sniff. But the fact that he seemed to repeat the word made it all the more unlikely that it was just a random noise that came out of his mouth. With Trump, it's hard to tell what words are just sounds that come out of his mouth and what are actual, confirmed English words that he means.

During the final debate, Trump employed the word again in a discussion about immigration and social media freaked out. In any case, "bigly" doesn't mean anything to most human beings. According to Merriam Webster, though, "bigly" is a word. It means "in a big manner, with great scope," or "in a swelling blustering manner," which pretty much sums up what Trump is all about. A big, blustering swell.

So maybe it is a big conspiracy against Trump that everyone seems to think he doesn't have a command of the English language. Maybe Trump is just smarter than the rest of the the English-speaking world for breaking out "bigly" so often during the debates. That's his big vocab win. Everyone should assume that since the majority of the internet scoffed at the use of the word when it actually exists in a dictionary, Trump just knows better. Gosh, I hate when Trump is right (it's actually never happened in my experience before, but I'll hand it to him on the grammar).

But come on, everyone. Do we really think that Trump is in the know on the inner workings of the English language? It's possible that his use of "bigly" is a total fluke. In any case, it's not a great way to connect with everyday Americans who just aren't smart enough to keep up with him when it comes to adverbs.

You know that old Maya Angelou saying about listening when someone tells you who they are, deep down? No one should be surprised that Trump knows about the word "bigly" when everyone else doesn't. He said last December that everyone should respect his education. "I’m telling you, I used to use the word incompetent. Now I just call them stupid. I went to an Ivy League school." The candidate added, "I’m very highly educated. I know words, I have the best words... but there is no better word than stupid. Right?"

Give credit where credit is due, America. Trump knows words. Still, whether he knew what he was actually saying when he said "bigly" is up for debate.