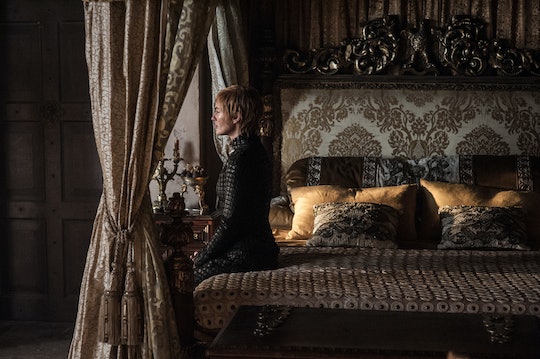 This Latest 'Game Of Thrones' Twist Could Alter Cersei's Prophecy

On Sunday's episode, Cersei told Jaime she was, ahem, with child, which was surprising to diehard Game of Thrones fans for several reasons, not least of which having to do with a certain prophecy made to her as a child. So what does Cersei's pregnancy mean for her prophecy on Game of Thrones? If she is pregnant, it means that everything that fans (including myself) thought they knew about her immediate future is called into question. If we can't trust prophecies, than what can we really trust at all anymore?

As a child, Cersei and her friend went to go see a local witch and fortune-teller named Maggy the Frog, as one does. Maggy the Frog predicted several things for Cersei, and as of this moment, all but one has come to pass. The witch told her that she wouldn't marry a prince, but a king. Cersei, if you can remember back that far, married King Robert Baratheon, so consider that part correct. Maggy also told young Cersei that she would be queen until a younger and more beautiful queen would strike her down. This could refer either to Daenerys or Margaery, but condsidering the latter is now dead I'm more prone to believe that it's most likely referring to Daenerys here. But that's just my own personal hunch.

Cersei then asked if she and the king would have children. The witch said that he would have 16, and she would have three. Maggy also said that her three children would die, (which they did) and when her tears had drowned her, a "little brother" would kill her. Though almost all of the prophecy has been true so far, if Cersei really is pregnant, that calls the whole thing into question. This could mean that her little brother (whichever one it may have been referring to) really won't kill her, making all of this speculating for nought. If all of that is true, it means that the showrunners could really throw everyone for a loop and Cersei could win the whole thing.

But Cersei's pregnancy could change the game for other characters as well. If her prophecy turns out to be untrue, it calls into question all the other prophecies in the show as well, including a certain prediction having to do with a resurrected Azor Ahai or Prince That Was Promised. Basically, if Cersei isn't lying about her pregnancy and actually gives birth to a child, everything everyone thought they knew about this show is wrong, and a horrifying surprise is probably forthcoming.

So yes, I hope that Cersei is lying about this, because I can't handle anymore surprises.