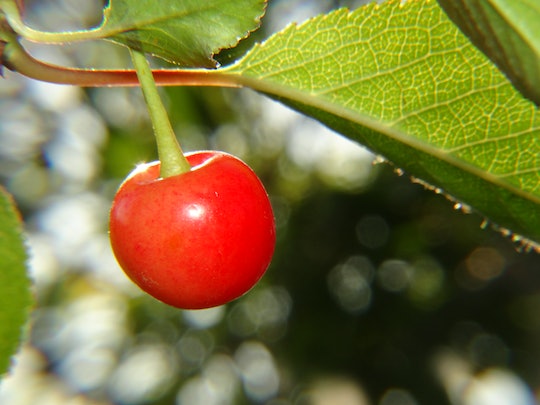 Cherries & Other Fruit Emojis Are Apparently Taking Over Snapchat Once Again

What do teens, fruits, and Snapchat have in common? They're the three vital components of a new coded social media craze designed specifically to confuse boys. Specifically, teenage girls have devised a diabolical plan to confuse and frustrate their potential love interests by posting fruit emojis on their Snapchat Stories to offer a glimpse of what's going on in their love lives and indicate their relationship statuses... but only to other girls. Details of the game have leaked onto popular virtual forums like Reddit, however, so even baffled guys can find out what the cherry, for example, means on Snapchat with a little internet sleuthing — especially if they want to know what their crushes are thinking, and whether or not they're available.

A grainy photo on Imgur of a message apparently sent to girls explains the significance of each of the fruits, and it's not quite as esoteric as it may once have seemed:

Obviously, fruit is not just fruit anymore on teen Snapchat, and whoever started the game years ago really succeeded in flooding Snapchat Stories with the coded emojis.

And, as internet fads frequently do, it got old very, very quickly:

For guys who learned that the girls they like were actually "cherries," or "in a relationship," the situation may have even caused some tears and heartbreak:

There was also the suspicion that some of the emoji-posters may not be totally honest:

Why this trend is happening again in 2020 is a mystery, but folks on Twitter are probably just as confused as you are. "Why is my Snapchat full of people saying cherry and strawberry?" one Twitter user asked on April 12. “Are we all turning 12 during lockdown with these trends? I just don’t understand.”

Just like in 2016, the meanings of these fruit emojis are bound to get leaked. And this might lead some to pick out other coded emojis to use, such as pandas, whales, and pigs to confuse them even more. The goal seems to be to interact with the opposite sex by employing secrecy and other covert, ever-changing operations to keep them guessing and intrigued. If nothing else, it looks like it's working.

More Like This
Ed Sheeran Just Revealed He's A Dad Of Two With The Sweetest Instagram Announcement
Chris Pratt & Katherine Schwarzenegger Welcomed A Baby Girl With The Prettiest Name
This Mom Gave Birth On Graduation Day, So The University Brought Her Degree To Her
Reddit Is Stunned By Mother-In-Law Trying To Breastfeed Her Granddaughter

This article was originally published on Dec. 29, 2016