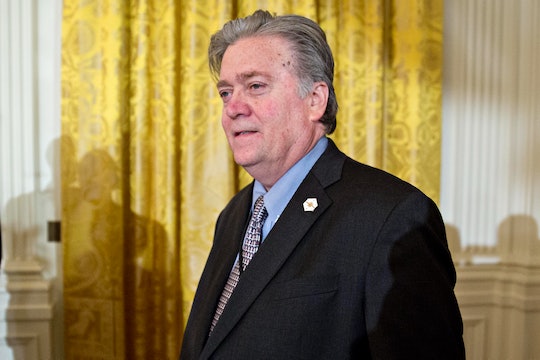 This is possibly the first time that the White House has had so many men with so many ex-wives in it at the same time (not that that's necessarily a bad thing, but bear with me). President Trump has had three wives, including the current first lady. His top advisor, Steve Bannon, has also had three wives, though he is currently single. He's been married to Cathleen Suzanne Houff, with whom he had a daughter, Mary Louise Piccard, and whom he divorced in 1997; and then he married Diane Clohesy and divorced her in 2009. There's a decent amount of info out there on the internet about his first relationship, but details about Diane Clohesy and what she thinks about Bannon are lesser known.

The White House did not immediately return Romper's request for comment on Bannon's relationship with his ex-wife. Still, it helps that we can notate Clohesy's own views and work backward in a way. Example: We don't know much about Clohesy's thoughts on Bannon's new job, but we do know that she likely shares Bannon's views about elections and voter fraud, presumably meaning that she's okay with his first actions in the White House as president—I mean, chief strategist to the president.

On a related note, you might remember, in an ironic turn of events, that Bannon is registered to vote in two states. In fact, the house that he was registered in in Florida was one that he bought for Clohesy in Miami, though he never lived there. Clohesy did live in the house up until recently, according to The Guardian. But she has a weird voting situation, too.

Instead of using that address in Miami-Dade County, Clohesy is registered to vote in Broward County using a P.O. box. Except, that happens to be against the county's voter registration laws. So, if there are millions and millions of fraudulent voters, as Trump claims, Bannon and Clohesy might allegedly be two of them by Trump's standards, though it's highly likely that that's 100 percent not the case (since, you know, the "voter fraud" accusations Trump has made are largely unfounded). Regardless, it's a safe bet the two have some thoughts about the entire voting system as a whole, and that Clohesy probably supports Bannon's views.

Since their divorce, Clohesy has been working on the same conservative films that the former Breitbart CEO produced. Between the voting registration, the shared ideologies for their films, and the fact that Clohesy is a Tea Party activist — there doesn't seem to be any bad blood between them.

In fact, while they were together, Clohesy struggled with substance abuse issues and Bannon reportedly stuck by her through it all. Her brother told the Miami New Times, "My sister Diane is one of millions of Americans that suffer from drug and alcohol abuse and depression. Steve has always been there for my sister, whether it be providing emotional or financial support as she battles this horrible disease."

Clohesy's brother added, "The family can't thank him enough. We appreciate the media respecting my sister’s privacy at this early stage of her recovery."

So unlike his other ex-wives, with whom he shares allegedly difficult relationships, Bannon and Clohesy might actually be on friendly terms — and in the grand scheme of things, that's the best possible scenario.