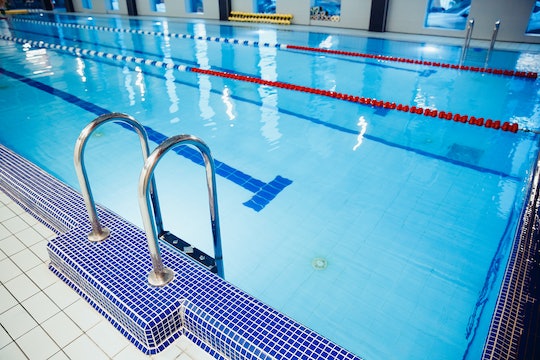 If you've ever seen an episode of House Hunters, you've seen someone panic because there's a pool, pond, or lake in the backyard. Usually, those people are parents. I used to get so frustrated with these episodes. I mean, just teach your kids to swim, right? However, water safety is more than just swimming or keeping your kid in water wings — you really need to know the dangers of water, including the signs of drowning. So what does drowning look like? The scary part is, it's nothing like it's portrayed in movies and on TV shows.

More Like This
Vaccinated People Can Ditch Masks. Where Does That Leave Kids?
30 Cheap & Easy Summer Activities For Kids
This Is Why Your Toddler Wants To Feed You All The Time
If A Tick's Head Gets Stuck When You're Pulling It Out, Here's What To Do

Think about every drowning scene or scene of someone struggling in water in pop culture. There's a lot of splashing, a lot of screaming, a lot of gasping for air. In other words, there's a lot of misconception. According to the World Health Organization, drowning is the second leading cause of accidental death in children ages 1 to 14 in the United States, and most parents have no idea what it looks like. In fact, so many parents think that once their child learns to swim, they're safe (I used to think this, too), but that's just not the case. The USA Swimming Foundation used those statistics from WHO as the motivation behind the "Make A Splash" program, which has given nearly five million children the life-saving gift of free or low-cost swimming lessons. Still, that doesn't mean they're safe in the water. The mission statement behind the "Make A Splash" program argues that no child is safe in the water, but swimming lessons can make them safer.

Summer Sanders, Olympic Gold Medalist and ambassador for the USA Swimming Foundation, agrees. In a phone interview with Romper, Sanders says that many parents believe their child is capable of swimming, and therefore, capable of not drowning in the water. "You need to be an active member of the swim experience," she says. "I call it having your CEO — constant eyes on. It only takes one second for there to be a tragedy, and you just can't risk it." Sanders goes on to say that if your kids are swimming, you have to be involved, too. You can't engage with a friend on the outside of the pool or focus all of your attention on your phone. You have to be aware of what's going on, because drowning? It's not a loud experience.

"There's a big misconception that drowning is a large action," Sanders says. "The truth is, most drownings are quite silent. You’re not going to hear your kids if there’s chaos in the pool." She is adamant in teaching parents, again, that it only takes a second for drowning to happen. In fact, Sanders referenced her own story with her toddler son. While speaking with her mother, right over the kiddie pool, her son managed to end up face-down in the pool, just a few inches away from her. Sanders says immediately she realized she had to teach him how to get himself out of similiar situations, but that she also had to keep constant vigilance over any child in any body of water, whether it's an ocean or a kiddie pool with just a few inches to splash in.

In an interview with University of Utah Health Sciences Radio, Dr. Scott Youngquist suggested that drowning could actually be happening while you're looking at your child and assuming there successfully swimming. According to Youngquist, drowning is silent and happens rapidly — when a person is drowning, their legs are usually still, their face is near the top of the water with their head tilted back and mouth open, they are bobbing up and down, trying to gasp for air, and they won't be screaming. Their eyes may be closed or glassy, they may be gasping, and they may be trying to roll onto their back — with these signs, many think the person drowning is just floating through the water.

But Sanders insists that you don't have to be terrified of the water. Instead, you just have to remain vigilant. "We want our kids to love water, but we also want them to respect the water," she says. Sanders noted that in teaching your children to swim, you also teach them how to react if they are ever in a situation where someone has to help them. "The water is a respectful environment — you should always remind kids to never hold on to a friend or peer if they're in trouble. Instead, they should hold on to the side of the pool." She says that it's possible to pull someone right under if you're hanging on to them, even if the other person is a great swimmer. "Just relax and let the person who's coming to save you, save you," Sanders says. "You can swim, you can relax enough to float up — your hands shouldn't be on anyone."

If you're looking for swim lessons for your child, the USA Swimming Foundation has resources available to find a pool and instructor near you. Keep constant eyes on your kids, teach them to swim, and teach them to respect the water. Remember, no child is safe in the water, but they can be safer.