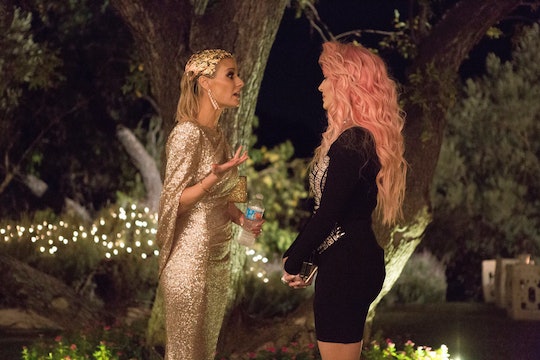 It’s not a complete season of The Real Housewives of Beverly Hills without some of the drama spilling out into not only the reunion special, but also real life. On the season finale, there was still tension and discord between some of the women but even now, what does Erika think of Dorit on The Real Housewives of Beverly Hills? This was only Dorit’s first season on RHOBH, but already she had enough drama surrounding her to make it seem like she’s been there stirring up trouble from the beginning. Well, to be fair, the drama wasn’t all her fault, but it definitely takes more than one housewife to keep something going and Dorit and Erika have managed to keep their drama up all season long.

Although Season 7 has come to an end, Erika is reportedly ready to fire back at both Dorit and her husband PK on the reunion special, so I’d say that things are somehow still not settled with this RHOBH rivalry. According to People, a sneak peek of Part 1 of the RHOBH reunion shows Erika not only bringing up the now-famous "pantygate," but also confronting PK himself about it. I can’t say I’m surprised, since this feud between Erika and the newest member of the show was a huge story for Season 7, but where and when does it end?

For those who need a quick refresher course in "pantygate," it all began when Erika didn’t wear any underwear and PK got a shot up her skirt at a party at the beginning of the season. This evidently didn't sit well with Dorit and she decided to gift Erika with a pair of designer panties the next time she saw her.

Apparently, it was meant to be a light-hearted joke, but let’s be real. In what world would that ever go down as innocent between two women who are already at odds with each other? It was definitely meant to shame Erika. On the RHOBH reunion special, Erika reportedly tells PK that they shouldn’t even still be talking about it, but that she feels like she never got the right kind of apology from the new RHOBH couple. And who can really blame her?

Meanwhile, Dorit — who continued the drama surrounding the incident — has said that she’s over the drama that ensued and even told Us Weekly that she had expected, going into the show for the first time, that she and Erika would become friends. "I thought her and I would be fast friends," Dorit said, while adding:

We have some friends in common and they told me they thought she and I would really connect and be great friends. She’s a glamorous girl, and I was under the impression that she just loves to have fun and that we’d undoubtedly connect.

And even though the drama is apparently still very much alive between the two RHOBH stars, Dorit stated that, "I think it’s very possible that we will be friends one day." Erika, on the other hand, hasn't said anything as optimistic about her RHOBH rival, so it doesn't seem likely that these two will patch things up anytime soon.

When the women appear on the RHOBH reunion, they’re going to have to face each other yet again and, as long as there are no other backhanded insults thrown around, maybe something can be salvaged of their tragic non-friendship.