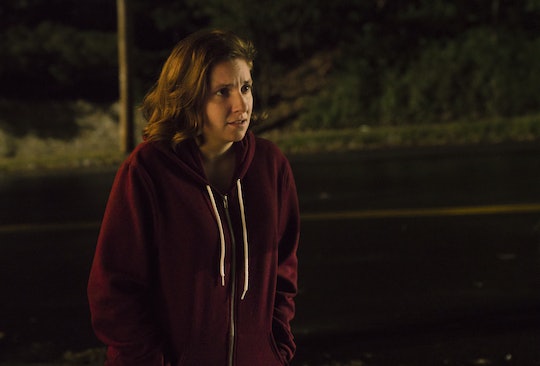 It's been a bittersweet thing to see HBO's Girls come to a close. And although this final season has taken some surprising turns, it became clear as soon as Hannah's pregnancy was announced, that at some points fans would get a chance to meet Baby Horvath before the series wrapped. And such was the case for the series finale, appropriately titled "Latching." It was revealed last week that Hannah was expecting a boy, but what does Hannah name her baby on Girls? The decision may surprise you — it's Grover.

Yes, Grover, as in the same name as the lovable puppet who currently takes up residence on Sesame Street. It was definitely a shocking name to hear come out of Hannah's mouth since part of me was certain the name would end up being a nod to someone who is very important to Hannah... like Elijah for instance. But in a way, it's kinda sweet since it's the name Paul-Louis — the father of Hannah's child — wanted her to name him. So even though he's not in the picture at all, this gesture ended up being a small tribute to him nonetheless. Either way, though, Twitter was a little mixed about their feelings in regards to the name.

What's even more surprising (at least for me) was the fact that Hannah's pregnancy was over so quickly. One minute Marnie was asking to help raise the baby with Hannah, and the next minute, the baby had arrived. Part of me expected fans would see the moment Hannah's water broke or the actual birth itself.

However, the series finale did tackle a very important topic that many mothers face: the struggles with getting an infant to latch. Considering the title of the episode is called "Latching," it makes sense that the storyline centered around Hannah's attempts at breastfeeding. The fact that Grover stopped latching made Hannah feel insecure — she even went so far as to proclaim that her child hated her. Then there was the whole breastfeeding vs. formula debate, which is something that many mothers find themselves asking about. But as usual, Girls is never just about one thing. Sure, Grover was having a hard time latching, but then again — so wasn't Hannah, though in a different sense, of course.

Since the very beginning of the series, Hannah has struggled with making the jump to adulthood and now, even in motherhood, this still seemed to be the case. She was having a difficult time dealing with the fact that she has a child — something that her mother reminds her that she can't just take back or refuse to deal with, like she's done with so many other aspects in her life. That's why the ending (whether you liked it or not), was actually pretty fitting. Grover finally latched when Hannah seemed to latch onto the fact that this is real. This is her life now and one that she will be embarking on with a baby boy by her side.