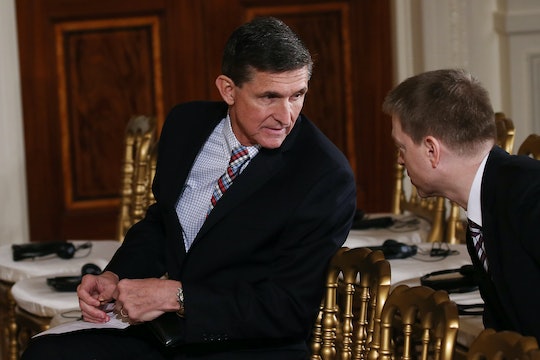 Retired Lt. Gen. Michael Flynn has had a tough 2017, and it's still only March. He started out the year as President Trump's newly selected national security adviser. By February, Flynn had resigned amid allegations of impropriety. He was accused of deliberately misleading White House staff members about his connection with Russian Ambassador Sergey Kislyak. And now, Flynn is reportedly seeking immunity in exchange for his testimony about Russia.

According to a report by The Wall Street Journal, Flynn's lawyer has spoken with the FBI about the possibility of testifying as part of the ongoing investigation into President Trump's alleged ties with Russia during Trump's campaign. If the report can be confirmed, Flynn is looking to be interviewed in exchange for immunity from prosecution in relation to the investigation. Romper has reached out to both the Senate Intelligence Committee and the Defense Intelligence Agency for comment and is awaiting a response.

Flynn was one of Trump's top campaign advisers before being chosen as the national security adviser. He would have been privy to a wealth of sensitive information, after taking his post alongside the Trump administration as it moved into the White House. Now that Flynn is no longer part of the Trump administration, his lawyer, Robert Kelner, has allegedly approached not only the FBI but also Senate and congressional officials investigating the case. Officials with knowledge of the case reportedly told The Wall Street Journal that Flynn has yet to be taken up on his offer.

Flynn resigned in February after reportedly misleading White House officials, including Vice President Mike Pence, about several phone conversations with the Russian ambassador during Trump's transition into the White House. One of the conversations in question was carried out on Dec. 29, the same day President Obama announced sanctions against Russia in retaliation for that country's interference in the 2016 U.S. election.

Since Flynn's resignation in February, there have been more questions raised about his alleged ties to Russia. Specifically the $45,000 he received for speaking at an event for the state-sponsored Russian media outlet RT in December 2015. Flynn was already advising President Trump at the time.

Flynn's lawyer released a statement regarding Flynn's possible request for immunity, according to The Hill, which read:

General Flynn certainly has a story to tell, and he very much wants to tell it, should the circumstances permit. Notwithstanding his life of national service, the media are awash with unfounded allegations, outrageous claims of treason, and vicious innuendo directed against him. He is now the target of unsubstantiated public demands by Members of Congress and other political critics that he be criminally investigated. No reasonable person, who has the benefit of advice from counsel, would submit to questioning in such a highly politicized, witch hunt environment without assurances against unfair prosecution.

Whether or not Flynn's alleged terms will be met remains to be seen.