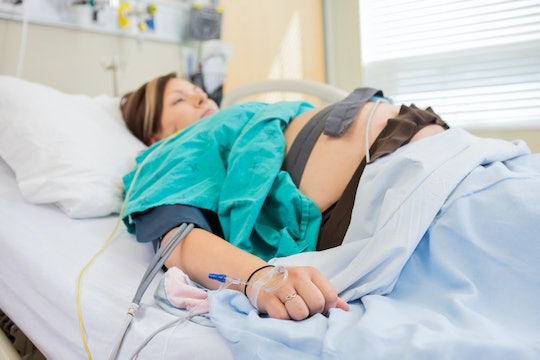 This Is What An Induced Labor *Actually* Feels Like, According To Experts

When my doctor suggested induction, I worried, among other things, about pain. I'd heard that induced labors are more painful than spontaneous ones, but was it really true? What does an induced labor feel like? It's a fear a lot of moms have, especially as their due date passes, and rightfully so. Induction has such a negative connotation that the baby forums are full of moms urging others to avoid it at all cost. But why? Is it more painful than a "natural" childbirth?

Doctors have several options when it comes to induction, but of those, Pitocin is perhaps the most notorious. To break it down: oxytocin is the double-edged hormone that causes both loving feelings and excruciating labor contractions — Pitocin is a synthetic, manmade version of that same hormone, noted Mayo Clinic. According to most reports, synthetic oxytocin has more bite, but it's important to note that experience is subjective.

Varda Epstein of Kar4Kids was induced with Pitocin for a few of her 12 pregnancies, and to her, the pain depends at what point you're given the drug. She tells Romper that she finds the effects much less noticeable once labor becomes established. However, at one of her births, the doctor pushed Pitocin before Epstein experienced a single contraction, and she describes that labor pain as "especially wrenching":

"The midwives were angry at my doctor for inducing my labor. . . I heard them giving him hell. . . Based on my history, I know he did the right thing. I'd had an overdue baby my previous pregnancy whose sac was so old it fell apart during the birth — a major emergency. This baby was already a few weeks late."

Just as oxytocin is a double edged-sword, induction isn't as simple as good or bad, natural or unnatural, painful or painless. When necessary, induction is a life-saver. According to Monica Lee, MD, a mom to one son and an OB-GYN in the LA metro area contributing to Mommy MD Guides, you can't ignore the context of an induction experience.

"Pain is a neuro-sensory guided perception that is often exacerbated by anxiety," Lee explains to Romper. "If you need Pitocin because, say, your labor was prolonged or you're being induced, that may cause more anxiety and thus more pain in general. I wouldn't blame the pain on a medicine that is necessary to create contractions to push the baby out."

Lee also wants you to know that beyond any pain, the situation itself may be uncomfortable. "Inductions can take a long time, sometimes three days or more. You are usually hooked up to an IV and can get very swollen. Usually you are sleep deprived and very tired, too." Having been through an induction myself, my very best advice is to sleep as much as you can the night before. (Like a kid on Christmas, I couldn't. Unlike a kid on Christmas, I then had to face my labor, already sleep deprived).

Author and former L&D nurse Jeanne Faulkner, RN has herself experienced two Pitocin inductions and two spontaneous labors. She tells Romper that she believes Pitocin upped the intensity of her labor by bringing contractions closer together. Whether or not contractions on Pitocin are more painful, she explains, "We compress labor into a shorter period of time."

Pitocin isn't the only induction option out there. Doctors may also use a cervical ripener like Cervidil or Cytotec to ready the cervix for labor — women often report a feeling something like menstrual cramping after a ripener is administered. Finally, doctors can perform a membrane sweep or use a Foley catheter to manually induce labor, according to Mayo Clinic. Faulkner describes both as "pretty darn uncomfortable," though she stresses that pain is highly subjective.

While spontaneous labor builds gradually, an induced labor can be hectic and abrupt. As a result, women are more likely to request an epidural to help manage their pain.

If you know you're going to be induced, take control of your envirnoment as much as you can, suggests Carley Mendes, Registered Holistic Nutritionist & Childbirth Educator, Founder Oh Baby Nutrition and expert at The Tot. Dim the lights, play calming music, and perhaps select a flickering electric candle or two. For Mendes, calming your mind is the key to navigating your contractions. She also tells Romper that she recommends seeking out a doula specializing in induction, especially if you're eager to avoid an epidural or the infamous "cascade of interventions."

"Ask to take it slowly, to give your body the best chance of doing its thing. I have seen inductions work well when a woman starts the process slowly and allows her body to catch up and take over."

For Stone, that may mean using breathing techniques and movement to ready your body before a medical induction begins, or requesting the lowest possible dose of Pitocin to start.

Yes, an induced labor will likely feel different from a spontaneous one, but then, birth is unpredictable by nature. "Regardless of what happens and what path your birth takes, it’s really being open to the process, and I think more than anything, it’s about surrender," says Mendes, and she's right. While it's normal to feel anxious about an induction, you can remind yourself that ultimately, the goals are the same — healthy mom, healthy birth, and a healthy baby.