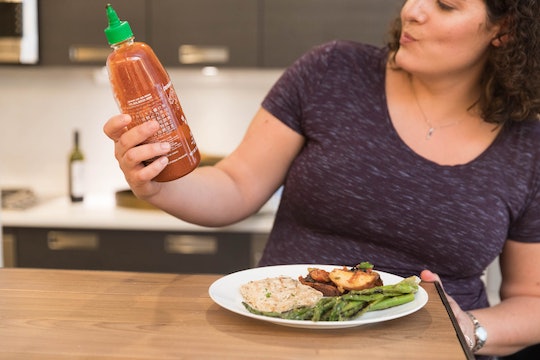 What Does It Mean If You Crave Spicy Food While Pregnant?

After experiencing nausea and morning sickness during the first trimester, it may feel like a blessing (and a curse) to want to eat all the things again during your second trimester. Pregnancy and cravings always seem to go hand in hand. While some women may crave the saltiness and greasiness of french fries, others may crave the sweetness of ice cream. And, of course, there are the women who fall into the spicy jalapeño and salsa category. After finishing a jar of pickled jalapeños, you may be asking yourself, “What does it mean if I crave spicy food while pregnant?”

According to a survey conducted on Baby Center, almost 40 percent of moms craved sweet foods, 33 percent craved salty foods, 10 percent craved sour foods, and 17 percent craved spicy foods. So what causes cravings during pregnancy, and why do certain women crave certain tastes and not others?

There are many theories as to why women have such strong cravings when they are pregnant. Some experts say hormones are the culprit, since hormones tend to increase your sense of smell during pregnancy. The more delicious things you smell, the more your brain will tell your stomach you’re hungry and that you have to have it now.

Alternatively, licensed acupuncturist Kristen N. Burris, L.Ac., tells Romper in an email that your heightened taste and smell "has the benefit of protecting the pregnant woman and her growing child against harmful chemicals, poisons, and particular foods."

Additionally, the stronger your sense of smell, the stronger your sense of taste — or your gag reflex. If you smell something stinky when you’re pregnant, it’s intensified, and it could create a food aversion. Foods with strong smells may cause nausea in early pregnancy, and unfortunately, can even last long after the baby is born. Kind of like how you can’t even stand the smell, much less the taste of Jägermeister without wanting to throw up, thanks to that horrible night your freshman year of college. Or is that just me?

Baby Center noted food cravings can be an indicator of something lacking in your diet. For example, if you’re craving a lot of meat, your diet may be lacking in protein, and you can either just eat some meat, or you can eat beans, fortified cereals, or tofu. If you’re short on magnesium, that could be why you’re craving sweets and chocolate. If you want a healthier alternative to chocolate, try eating some whole grains or seeds to satiate that craving.

Burris warns, however, if you’re craving ice, clay, or dirt, you might have Pica, which means you have an iron deficiency and need to seek help from your acupuncturist, midwife, or OB-GYN. "This further proves the theory that pregnant women intuitively know what their bodies and babies need, because once supplemented with proper nutrition and iron supplements, most women can curb or ignore their cravings for these unusual non-food items," she says.

But why do pregnant women crave spicy food specifically? Burris says, “According to Traditional Chinese Medicine wisdom and proven theories from thousands of years and billions of women, pregnant women crave spicy foods when their immune system is weakened." Burris mentions that spicy food nourishes the lungs, which is the first defense against viruses, bacteria, and parasites that could infect the mother and potentially harm the baby, and the desire for spicy food is intuitive. Other positive effects of eating spicy food include lower blood pressure, because the heat of the pepper increases blood flow, and happiness, because spicy food increase the production of serotonin, the feel-good hormone.

Is there such a thing as too spicy? Too spicy really depends on the person. If you’re comfortable eating salsa right out of the jar, go for it. However, don’t be surprised if you get heartburn. Burris says there are no known harmful spicy foods, but other types of spicy foods you can eat — that may not cause as much heartburn or hemorrhoids as jalapeños — include garlic, onions, cinnamon, ginger, cloves, dill, fennel, and radishes.

When my mom was pregnant with me, she ate jalapeños by the handful, craved Mexican food every day, and couldn’t get her hands on anything spicy enough to satiate her desire to light her mouth on fire. And I have to confess, I absolutely hate spicy food, and I always have. I personally prefer to taste my food instead of feeling the burn, but is that because my mom ate spicy food the entire time I was in utero? Did she ruin me on spicy food for life?

Though the theory that your cravings pass down to your children is a popular one, it hasn’t been proven — yet. So you’re in the clear, Mom.

As was previously stated, the main side effects of eating spicy food while pregnant are heartburn, upset stomach, and hemorrhoids, but there are also side effects for eating too much salt or too many sweets while trying to satiate your cravings. Burris says eating too much salt causes pregnant women to be overly thirsty and puffy, and too many sweets causes more rapid weight gain.

There are many factors contributing to craving different types of foods while pregnant — and there are healthy ways to satiate those cravings. But of course, it’s always OK to "treat yo self" every once in awhile.

Looking for healthy ways to handle food cravings? Are you craving ice cream? Try eating fruit to satiate that sweet tooth you have. Want potato chips? Eat pretzels or reduced-fat, low-sodium chips. Instead of doughnuts, eat a whole-grain bagel with fruit jam smeared on the top.

But no shame in your craving game. Eat what you want, as long as your doctor hasn't forbidden it. So, if that baby wants spicy food, feel free to stock up on the jalapeños. Just don’t forget the Tums.