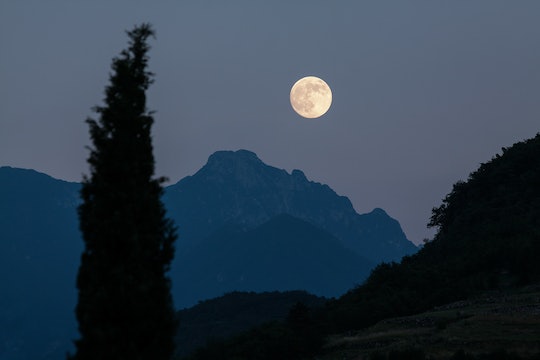 If You Give Birth During A Full Moon, Here's What It Means For Your (Werewolf) Baby

I always wanted to have a full moon baby. I've always wanted to be able to say "Oh, Luna? She was born during the full moon." (Of course I'd name my baby Luna if she was born on the full moon. Copernicus for a boy.) It seems like a really fun story, and you could always tease them good naturedly as they get older. But, what does it mean if you give birth during a full moon? You know, other than having an obviously cool name if you're my child.

People for thousands of years have attributed everything from fertility to the birth of Anubis and reincarnation to the phases of the lunar cycle. Even American literary legend Henry David Thoreau once famously wrote that, "to fall in love with the moon and the night, and find our love requited" was the cure for painful heartache. The people of Singapore have an entire calendar built surrounding the lunar cycle that dictates when families should be conceived and born for the most auspicious periods of fecundity and wealth.

I know I've heard the term "must be a full moon," more than once when out of the ordinary stuff is happening, too. Dude naked on the train into Jersey serenading a clown marionette? OK, that's just a normal Tuesday, but, six people offering one pregnant woman their seat? Must be a full moon. The same thing is said all the time by my husband, the cop. "Oh, it seems that everyone decided to drink too much and hang out on the beach." Must be a full moon. Labor ward full of women giving birth on a Thursday night? Must be a full moon. But, what does it mean if you give birth during a full moon?

According to The American Journal of Obstetrics and Gynecology, it simply means you needed to give birth, and the moon happened to be full. Researchers have found no correlation between the phases of the moon and physiological phenomena. You're also no more likely to experience adverse events during your birth nor are you more likely to need a C-section.

As far as your baby's behavior and future leanings, I spoke to astrologer Arianna Matasoukis, and she says, "Being born on a full moon is an auspicious event. Your baby's star chart will show the moon and the sun exactly opposite from one another, with your baby in the middle." She notes that astrologers believe that this means they might be "spread out" emotionally, but that they're more given to empathy and understanding, even if they don't always fully understand their own emotions.

"The sun and moon on opposite sides of the chart mean that you're more likely to be easily bored, and even a bit of a magpie. You might find yourself fluttering from one mental space to the next. Depending on which sun sign you were born in, this might be a good thing. For instance, if you're born under Capricorn, you might tend toward stubborn reliability, but that full moon influence helps bring you out of your shell sometimes. If you're born a Pisces, it might mean you're extra sensitive, even extra empathic. You'll feel things very personally and deeply."

I was not born under a full, but a new moon, according to the chart she drew for me, and she told me that's it's equally auspicious, and that I'm productive and enthusiastic, but not confused by my emotions. However, after having learned what it means for a full moon baby, I'm not as disappointed that I don't have a little Copernicus running around as a toddler understanding his emotions even less than toddlers do. If you do, good luck with that.