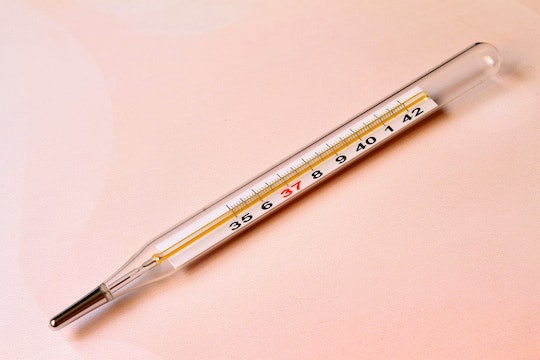 If You're Getting A Positive OPK, But No Temp Spike, Here's What's Happening

When you're trying to conceive, the slightest curve ball can leave you wringing your hands and crying in frustration. Ovulation predictor kits (OPKs) can be incredibly helpful in figuring out exactly what days your fertility is at its prime, but when their results clash with those of other symptoms you're tracking — like temperature and cervical mucus consistency — things can get super maddening, super fast. For instance, what does it mean if you have a positive OPK, but no temperature spike?

The answer, according to one expert, could be in distinguishing between the different functions of the two. Fertility Care Practitioner Sarah Babbs of Carmel Family Fertility Services in Carmel, Indiana tells Romper that ovulation predictor kits measure luteinizing hormone (LH) levels, which surge just prior to ovulation. A spike in temperature on the other hand, she says, confirms that ovulation has passed. So the most common explanation is simply that there was an LH surge, but no ovulation.

The question at hand then becomes, did your body completely fail to ovulate or is it still to come? It can be hard to tell, especially since OPKs are designed to assess whether you are going to ovulate, but can't ensure that you actually do.

According to the American Pregnancy Association (APA), there are several medical conditions that could result in a false positive result on an ovulation predictor test, including but not limited to polycystic ovaries, premature ovarian failure, perimenopause, and Luteinized Unruptured Follicle Syndrome. If you already know you are dealing with one of these, it would be wise to take a positive OPK with a grain of salt and measure it against other symptoms, simply because your LH level may be out of whack.

Your temperature can serve as one of those symptoms, as you already know. Parents magazine noted that, "When your basal body temperature rises higher than the temperatures you've recorded in the past six days, and stays at this level or increases for at least three days, it's likely that ovulation has occurred."

Since we're talking a possible difference of two-tenths of a degree here, it's important to double check the factors surrounding your temperature charting if it's been inconsistent with your OPK. Think back on the past few weeks and assess whether you've strictly adhered to the guidelines: You should be taking your temperature with a basal thermometer for a full five minutes before getting out of bed, eating, drinking, having sex, smoking, or even talking.

But even if you think you're sure you've got the art of the basal body temperature down to a science, you might not be aware of some of the more nuanced ways that your temp could be jacked around with. Did you know that, according to Parents, factors like smoking, alcohol consumption, lack of sleep, and emotional exhaustion can wreck havoc on your chart? Even sleeping with an electric blanket can mess with your body temperature, which you never even thought of when you piled it on the bed like you do every winter.

Basically what I'm saying is that when it comes to fertility awareness, there's a lot of margin for error. If your OPK is positive but your temperature never spikes, it could be a one-time fluke. But if it continues to happen pretty regularly and you're sure you've dotted your Is and crossed your Ts, talk about the pattern with your Fertility Care Practitioner or OB-GYN. Although it's frustrating, it could be a blessing in disguise if it means catching an undiagnosed medical problem. The sooner you know, the sooner you can move towards holding that sweet baby in your arms.