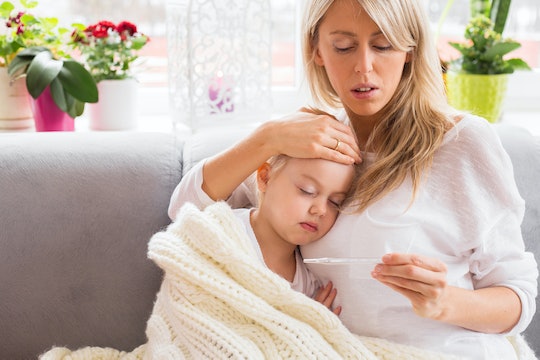 According to Time.com, the CDC announced that for the first time in all of its 13 years of monitoring the flu, “as of Jan. 6, every part of the continental U.S. is showing widespread flu activity.” And the symptoms could be fatal. So as a parent, it’s understandable you may be on super high alert as far as your kids showing any symptoms of possibly having the flu. When your kid comes home from school, complaining that their “whole body hurts,” you may panic a bit. But what does it mean if your child’s whole body hurts? Is it definitely the flu? Could it be something else? I asked a couple of pediatricians their take on the matter, hoping to put some fearful Google searching parents at ease. Unfortunately, however, your hunch may be right.

Dr. Daniel Ganjian, a pediatrician at Providence Saint John’s Health Center in Santa Monica, California, tells Romper that body aches don't necessarily mean flu, however, “given that this flu season is one of the worst in the last decade, it would be worthwhile for your child to be examined by his doctor to obtain the correct diagnosis." Dr. Candice Dye, assistant professor of pediatrics at the University of Alabama at Birmingham and Children’s of Alabama agrees, and tells Romper, “The flu often gives you muscle aches, also known as myalgias. If this is accompanied with a high fever and also respiratory symptoms, it could be the flu.”

Ganjian does say, however, that if your body is trying to fight off viral or bacterial infections, your body will start producing something called, “interleukins,” which helps to remove the infections. “ These interleukins often times cause body aches,” he says. Dye also adds that there are a lot of illnesses that make you feel run down and sluggish — much like the flu — however, whole body aches are usually indicative of the flu as this symptom is a classic flu symptom. But “if [your child has] endured some sort of aggressive physical training or injury, they could have body aches, but likely it would not affect the entire body,” she explains.

Both Ganjian and Dye describe other symptoms to look out for, along with the body aches if your kid does have the flu, including high fevers, stomach aches, headaches, coughing, a runny nose, sore throat, fatigue, and a headache. “Some kids will even have vomiting and diarrhea,” Dye says. “The symptoms often have an abrupt onset causing the patient to go from feeling well to not in a short amount of time."

When should you seek medical attention for your kid if they’re exhibiting these symptoms? Ganjian says, “Mothers should trust themselves. MD stands for Mothers Degree. If your child looks awful and you are concerned, bring them in. Absolute reasons to come in are babies less than 2 months old with temperature over 100.4 degrees Fahrenheit, or any child with difficulty breathing.” Dye adds, “You may be able to call the office and speak with a nurse or the physician to determine if you need to be seen or not. This year, the flu is especially virulent and most pediatricians would recommend taking Tamiflu, which is an antiviral to treat influenza. If your child has chronic conditions such as asthma, then treatment is very much indicated.”

As far as prevention goes, so you don’t even have to get to this point, Dye says very emphatically, “Get vaccinated every year. The vaccine is the single best way to prevent the disease. The vaccine does not give you the flu. It is a killed vaccine, so there are no live particles to give you active disease from the vaccine.” And even if you still get the flu after having the vaccine, it’s still a much milder version of it than what you’d have if you weren’t vaccinated. Dye says, otherwise, make sure to wash hands frequently, don't share utensils or drinks, and encourage others (and yourself) to not send a kid to school if they have any symptoms. Ganjian adds that you should incorporate “good hygiene, plenty of fluids, good nutrition, sleep, and exercise, to optimize your immune system.” He also suggests elderberry syrup, which he explains has been shown in studies to boost your immunity.

When treating the flu at home, Dye suggests using NSAIDs, having your child drink plenty of fluids, and giving older children over-the-counter cough/cold/flu medications. However, don’t give these medications to young children and read labels, she warns.

Trust your gut instinct. If you think your kid has the flu and their whole body hurts, they might certainly have it. Call your child’s pediatrician and see what their recommendation is to do. It couldn’t hurt right? You’ll probably just have to treat the symptoms with NSAIDs, have them drink plenty of fluids, and use a vaporizer and saline. And maybe even some elderberry syrup for good measure.