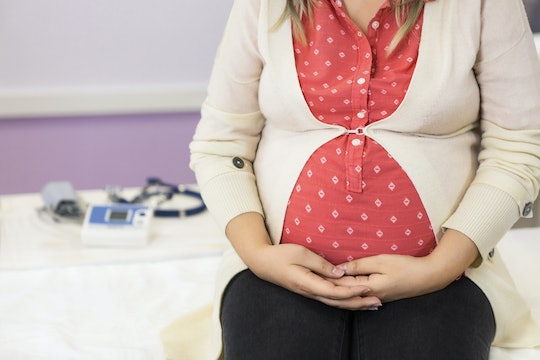 Here's What It Means To Have High Glucose Levels During Pregnancy

Pregnancy can be the happiest and scariest of experiences for any mom. With the abundance of information on the internet, and the temptations to self diagnose, any out of the ordinary test result or health issue can trigger stress. One such complication is high glucose levels. Many women have to undergo glucose tests during pregnancy, and if your results are above normal, you might be concerned. So what does it mean if your glucose is high during pregnancy?

In an interview with Romper, Dr. Kathryn Wright, OB-GYN of Facey Medical Group, says that a woman’s blood sugar level is elevated during pregnancy due to a hormone called Human Placental Lactogen. She says that this hormone is made in your placenta and can cause insulin resistance — which leads to more insulin being required to get the same amount of glucose from your blood into your cells. “This results in glucose and amino acid elevation in the blood,” explains Wright, “allowing greater availability to the rapidly growing embryo.” Even though this is a normal physiological change during pregnancy, Wright says that if your body overdoes it, it can lead to gestational diabetes.

So what is considered a high glucose level? According to Baby Center, different doctors use different methods and standards to diagnose what they consider high glucose levels. If your levels are above 130 to 140 milligrams of glucose per deciliter of blood plasma (mg/dL), some doctors may suggest further testing, but if the test results show that your blood glucose level is higher than 200 mg/dL, most doctors will diagnose you as having gestational diabetes.

According to What To Expect, your doctor will most likely have you take the one hour glucose test — the test in which your blood is drawn an hour after drinking the syrupy, glucose solution — first. If this one hour test results in higher than normal blood glucose levels, your doctor will probably have you take another test: the three hour glucose screening test. This test will confirm whether or not you have gestational diabetes.

Wright says that as pregnancy continues, the hormone Human Placental Lactogen increases, and it is expected for the diabetes to worsen. So if you’ve been diagnosed with gestational diabetes and are following an appropriate low-glycemic, low-carb diet, but are still getting higher blood glucose levels, Wright says that your doctor may recommend the addition of insulin or oral medications.

There are factors that can put you more at risk for gestational diabetes, too. What To Expect noted that women who are on bed rest, who have higher amounts of abdominal fat, who are overweight, or who are older than 35 are more at risk of developing gestational diabetes during pregnancy. Wright adds that women with a personal history of diabetes, as well as women who have a family history of diabetes, should be tested early in pregnancy as well as at the end of the second trimester.

But whether or not you have any risk factors, Wright says you should still be tested. And if you already have been tested, and have been told you have high glucose levels, you should be prepared to go through further testing. You should also try to keep active, suggested What To Expect, along with eating healthier, and monitoring your blood sugar levels. The website mentioned that almost 50 percent of women who have gestational diabetes continue on to have type 2 diabetes after pregnancy, so it’s important to reign in your health routine during pregnancy. After all, there is nothing more important than your health and well being, even after your baby is delivered.

More Like This
All Your Questions About Getting Pregnant After A Tummy Tuck Answered
Everything You Need To Know About Postpartum Blood Clots
Breaking Down The Different Types Of Postpartum Infections
Can The Way You Sleep Really Turn A Breech Baby?